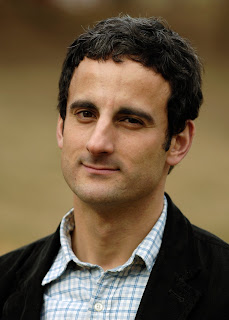 A few years ago Ariel Sabar quit his day job as an award winning journalist in order to work on a book. The shift from journalism to book writing was a challenge, but even more challenging was the subject of his book My Father’s Paradise, his father and his father’s history as Kurdish Jew. Those who knew Sabar when he was growing up as a California surfer boy were shocked by this topic, especially his father. Sabar recalls that he deeply resented his father, Yona, as a teenager. “I saw him as this burden whose association held me back from all I wanted to do,” he said.

Ironically Yona himself was a man who could not be held back from his destiny. Yona Sabar came from the Jewish part of Kurdistan, a corner of the world where “the Jews were written off as goners from the Lost Tribes of Israel,” Sabar said. Yet in the course of a single generation Yona went from being born in a mud hut to being tenured as a professor at UCLA. It was a rich past that Sabar never cared to learn about, but when his own son, Seth, was born in 2002 he realized everything he did not know about his own father. “I was not only doing a disservice to my father, but my children a disservice because they would grow up only knowing they were American without any history,” he said. “We have a sense we are free of history, but when you have a child it is very clear that is a myth. Instead I was the in the middle of an ever unfolding story of Jewish survival in lands not our own.” It was at this point that Sabar knew he had to write this book, as a writer, a son, and a father.

Writing about Kurdish Jews required Sabar to develop a closer relationship with his father than he had ever had before. The research involved hundreds of interviews and also trips across the globe, eventually landing him in Iraq with his father. Sabar said, “Maybe 2005 was not the best time for a sentimental return back to Iraq. I was going to a place with my father where I needed him for everything.” Yona acted as Sabar’s translator throughout the trip for language was a matter of survival in Kurdistan. As a child Yona was a polyglot. “He spoke Hebrew in the synagogue, Aramaic with the Jews and Christians, Kurdish with the Muslims, and Arabic when he traveled,” Sabar said. Language was what kept Yona connected to his hometown of Zhako even after he left as a boy of thirteen. “My father never stopped seeing Zhako through a child’s eyes,” Sabar said. “He knew he could never return to Zhako the physical place, but he could preserve it through studying language and culture.”

Yona has always been attached to Zhako even as he has succeeded in the United States as a teacher of his nearly lost language, Aramaic. “He’s been really successful at reinvetning himself. I always thought you cannot reconcile the past and present, but he does write his past into his future,” Sabar said. Learning his father’s story has allowed Sabar to understand him better than he ever could before. “The book gave us a common ground and a common vocabulary,” he said. “There’s always this place I can steer back to because when you write a memoir you are connecting with people.” One of the most profound connections for Sabar was the one between his own son and his father. “Seth has opened my eyes to a side of my father that I forgot about. So much of who you think your parents are is the folks we see when we are defining ourselves against them,” he said.

It is this multi-generational story of Jews who survived against all odds that makes Sabar’s book both fascinating and moving. As one of Sabar’s former newspaper editors used to tell him, “People don’t curl up at night with a great set of facts. Even if you’re writing nonfiction you should write if it is fiction…The best kind of stories grab you by the throat the same way a novel does.” The book is certainly gripping, not just for Jews, but for everyone. Sabar sees himself as tangent to the group of Jewish writers who are reclaiming their own stories. However reclaiming one’s history is not something only Jews do. “As Jewish authors we do not have to reflect the Jewish experience back to Jews only. The best books are transcendent,” Sabar said. “We should not have to write a book that only speaks to Jews, but we can take that and use it as a lens to look as universals.”

Alex Frank is a graduating senior who’s working on his thesis with Prof. Wald. Below is Alex’s description of his current work. [My] thesis is about the philosophy, art, and life of jazz musician Sun Ra through the lens of various contemporary critical theories. Sun Ra thought human beings would have to travel to another…

This just in from Prof. Tina Daub, who teaches ENGL 81, Introduction to Creative Writing. On Tuesday, April 27 at 11 a.m. in Phillips B-120, the acclaimed pianist known as ELEW is coming to her class to perform, and his concert is open to the public. This is the same ELEW who performed at the…

I hope that you enjoyed yesterday’s festivities as much as I did … and I hope that you are not suffering from the same difficulties in transitioning back to the workaday week. If you’d like a glimpse of what inauguration looked like to me and my son, you are welcome to browse my photos (you…

Former GW creative writer professor Jodi Bolz. UPDATE 5/22/12 at 11:48 a.m.:  Tonight’s reading by Jodi Bolz is at 6:30 p.m. Jodi Bolz, who taught in our creative writing program for more than 20 years, will be reading from her work at the Martin Luther King Jr. branch of the DC Public Library Tuesday, May…