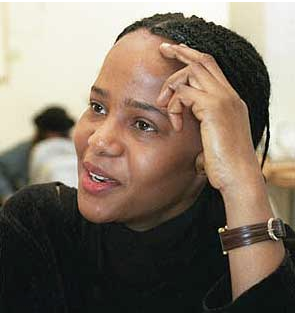 As I write, the news coming out of Haiti is unutterably sad. This small island nation, despite its proud history, has been battered again and again by disasters both natural and man-made. No doubt the poverty of Haiti is one reason the earthquake that struck near the capital, Port-au-Prince, has taken and will take such an enormous human toll.

Two years running now (I am taking a hiaitus this academic year), I have inaugurated my ENGL 40W class, Literature of the Americas, with a short story by Edwidge Danticat, our most famous Haitian-American writer. Danticat, the recipient of a 2009 MacArthur Fellow award (the prestigious prize also shared by new English department hire Edward P. Jones), was born in Haiti and lived there until age 12, after which she moved to the United States. Danticat’s personal experience of immigration–and of the attendant gains and losses of transplantation to a new country and culture–energizes all of her writing. She has published short stories, novels, and non-fiction, including Brother, I’m Dying, which won a 2007 National Book Critics Circle Award. I think of her 1998 novel The Farming of Bones, about the 1937 massacre of Haitians working in the Dominican Republic, as her best work to date.

But it’s to Krik? Krak!, her collection of short stories, that I turn in ENGL 40W–specifically to that book’s opening story, “Children of the Sea.” The story is epistolary in form: that is, told through a series of (imagined) letters, in this case between two young lovers separated by political violence during the brutal regime of “Baby Doc” Duvalier. The female narrator writes from her village, which has been terrorized by the Tonton Macoutes, Duvalier’s personal paramilitary force. Her lover, an outspoken critic of the government, is aboard a rickety boat, in an ill-fated attempt to cross the strip of Atlantic Ocean that separates Haiti from the United States.

The poignancy of the story lies in the fact that we, as readers, are privy to letters that will never be delivered. The young woman writes without knowing where to send her letters; the young man’s letters (his journal) ultimately sink to the bottom of the ocean, a place which also contains the remains of slave ships of an earlier era. In class, I use this story to introduce themes of diaspora, transnationalism, and “the Americas.” I argue that this is a story about missed communications and messages that cannot ever be delivered. It is about the lacunae between what is sent and what can ever be received. And yet it is also about the necessity of storytelling. Writing is an endlessly futile enterprise in “Children of the Sea,” but it is also a source of hope and salvation. Tonight I am thinking about my Literature of the Americas students, and Danticat, and Haiti.

Update 12:45 p.m. 1/14/10. Here is a list of donation options suggested by President Knapp, in his statement today to the GWU Community.

[illustration: Ellis Haizlip talks to Amiri Baraka in a promotional image for “Soul!”] “Soul!” was a groundbreaking TV variety show that aired on PBS from 1968-73. Originating at WNET in New York, the program featured an astonishingly broad range of black and Latino performers, many of who had never been on TV before. “Soul!“ presents…

Department alumnus Keith Feldman writes: I’m pleased to report that I write you from my new office at UC Berkeley, where I’ve just begun a tenure track position in comparative ethnic studies. As you might imagine, I’m thrilled—and deeply humbled—by the opportunity to work in such a generative atmosphere. I was hired in part because…

I am happy to confirm that esteemed novelist Nadeem Aslam will indeed be joining us for a month-long residency this February. The kick-off event is a public reading from his work, Thursday February 7 at 7 PM in the Marvin Center. A dessert reception will follow. If you’re interested in attending the reception, please follow…

Come experience the work of an award-winning writer who grew up in a traditional community in Jerusalem. Pearl Abraham grew up in Jerusalem during the 1960s; her family later moved between Hasidic communities in Jerusalem and New York. Her first novel, The Romance Reader, won praise from the New York Times, Washington Post, Publishers Weekly,…

Writer and Activist Grace Paley Last Thursday, I had the opportunity to attend the screening of Lilly Rivlin’s documentary Grace Paley: Collected Shorts, as a part of Prof. Faye Moskowitz’s Jewish Literature Live course, which works to bring in Jewish authors to speak. The film tells the story of the life and work of Grace…