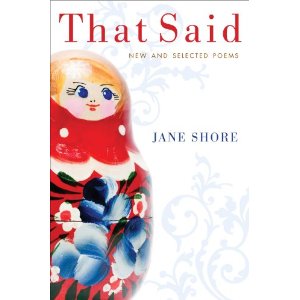 In Shore’s first retrospective collection, fortunes and fairy tales converge with real experiences—a daughter growing up, a mother’s death, an aging father, a young classmate killed in an accident—juxtaposing life as imagined against life as it turns out: “It didn’t weep the way a willow should,” the book begins, “Planted all alone in the middle of the field/ by the bachelor who sold our house to us.” Shore reflects on the passage of time—complete with Chinese take-out, Scrabble, and dolls of all kinds (American Girl and otherwise)—through poised ruminations on selfhood. In “The Russian Doll,” Shore writes, “I thought the first, the largest, doll/ contained nothing but herself,/ but I was wrong./ I assumed that she was young/ because I could not read her face./ Is she the oldest in this matriarchy—/ holding within her hollow each daughter’s/ daughter? Or the youngest—// carrying the embryo of the old woman/ she will become?” And at their best, these poems are deliberate, curious, and as unassuming as Bishop’s. Shore does what the best memoirists attempt: in describing one life, she describes the condition of all lives. (Apr.)
Reviewed on: 03/23/2012

Prof. Shore will be reading from her new collection on April 19 at 7 p.m. (room TBA).

Was it T. S. Eliot who wrote “February is the shortest month / Mixing brevity with terseness / Except when leap year adds a day”? I believe it was, and to my colleagues and our students the month seemed brief indeed, so enamored of Nadeem Aslam are they. Nadeem is the inaugural GW-British Council Writer…

The deadline for the T-shirt contest is Friday 11/2. Earn enduring fame via your clever logo! The deadline for applying for the new English Department Communications Liaison internship is Thursday 11/8. Here is the description and procedure: For the spring semester, the GW English Department is seeking a Communications Liaison, an internship position providing 3…

Bruce MacKinnon teaches creative writing here at GW. His wonderful new book of poems is called Mystery Schools. Here are some endorsements and some information. “In his attention to detail and in his reverence for the smallest moments of experience Bruce MacKinnon compounds and intensifies the events of daily life. Mystery Schools sings with a…