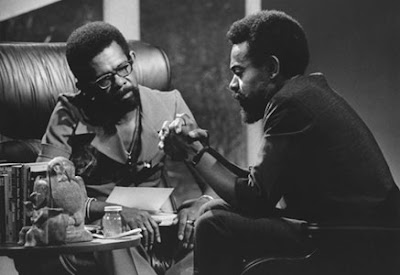 [illustration: Ellis Haizlip talks to Amiri Baraka in a promotional image for “Soul!”]

“Soul!” was a groundbreaking TV variety show that aired on PBS from 1968-73. Originating at WNET in New York, the program featured an astonishingly broad range of black and Latino performers, many of who had never been on TV before.

“Soul!“ presents a fascinating opportunity to examine how a television show attempted to communicate ideas about Black Power to a television audience. Professor Gayle Wald is currently researching and writing book about “Soul!” — its production history, cultural significance, influence, and audience — for Duke University Press’s “Console-ing Passions” series, which focuses on television and film. The book will be the first academic study of “Soul!”, a show which is not currently commercially available (although enterprising DC folks can see episodes at the Library of Congress–and you might even bump into Prof. Wald there). Interest in “Soul!” is building online, and WNET has recently begun making selected episodes available for streaming. Prof. Wald has also contributed an essay to the WNET website, documenting the basic history of the show and its host/producer, Ellis Haizlip, a Washington, DC native. The comments are themselves worthy of reading, just for the testifying.

Judith Plotz is amazing, but you already knew that. One of our most beloved faculty members is retiring this year because, as she puts it, “Well, I thought I better retire when people were surprised I did rather than when it wasn’t surprising.” Jokes aside, Prof. Plotz has been inspiring students to follow their passions…

Please stop by the English Department office (Rome Hall 760) for tea, cookies, and sherry. If you are a current student, you are welcome to stop by for tea and cookies. We are legally obligated to slap your hand HARD if you reach for the sherry. Share on FacebookTweet

Don’t forget to mark your calendars for the 2010 GW English Distinguished Lecture in Literary and Cultural Studies on Friday, Nov. 5 at 4 pm in 1957 E Street, room B12. This year’s lecture will be delivered by Prof. Sara Ahmed, Professor of Race and Cultural Studies at Goldsmith’s College, University of London. Here is…

ME: So, Mr. Very Famous Author, I hope that you are as excited to come to GW as we are to have you in residence this coming spring. FAMOUS AUTHOR: Indeed I am. ME: It’s a big deal for us, and we’d like to celebrate it. FAMOUS AUTHOR: I see. ME: I’ve been charged with…