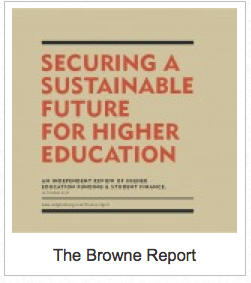 Many of this blog’s readers will have heard about the Browne Report recently released in the UK. The report by Lord Browne reviews Britain’s higher education system and proposes sweeping changes in the ways that students’ educations are financed.

If adopted–and there is wide agreement that it will be–the Browne Report will make higher education much more expensive, and will put considerable pressure on various disciplines, including humanities disciplines, to justify themselves in terms of market values and profitability. In both respects, the report will have chilling effects.

James Vernon, a historian at Berkeley who was educated in England, has recently been circulating an essay in response to the Browne Report. Vernon’s essay includes a passionate defense of the humanities, arguing that students value the critical thinking and language skills imparted by humanities disciplines, and offering an impassioned case for study that “speak[s] to different systems of value.” “Economic utility,” he concludes, “is not the measure of who we are or who we want to become.”

This is an argument that the humanities themselves have been making for a long time, and in different ways (see Matthew Arnold), but the Browne Report, and indeed increasing pressures on the humanities in US institutions, have renewed these debates.

Back in the 1990s, I sometimes taught a course in Cultural Studies, which spent a good deal of time looking at how the humanities had been constituted in US and UK higher education. In 1990, Stuart Hall, for example, published “Cultural Studies and the Crisis in the Humanities.” Maybe it is time to revisit some of these issues and debates?

Dear friends,It has been my pleasure to serve as chair of the GW English Department for the past three and a half years. Now that my term of service is coming to an end, I want to thank you for the support you’ve given me to make this time in office so enjoyable — and…

Professor Margaret Soltan, via Columbia News Service, talking about Gchat and professor-student interaction: For Margaret Soltan, an English professor at George Washington University, Gchat is wonderful for connecting with students outside of class. Over the years, the tech-savvy teacher has accumulated dozens of students on her Gchat list, and she chats with them frequently. While…

Starting this afternoon, thousands of writers will be gathering in DC for the annual conference of the Associated Writers & Writing Programs, headquartered this year at the Marriott Wardman Park in Woodley Park. The conference features readings from scores of writers, as well as opportunities for writers to network with editors, publishers, and each other….

Please join us for the debut reading of our GW-British Council Writer in Residence, Suhayl Saadi. This FREE READING is at 8:00 PM at the George Washington University, 1957 E Street NW, between 19th and 20th Streets (City View Room, 7th Floor). More information about Suhayl Saadi may be found here at the British Council…

Here are two blogs by current GW students: one, two. Here is one from a former GW English major. Are there more? What else do GW English Blog readers read, and write? Share on FacebookTweet

… but if you missed out and are not so benighted that you have no interest in reading The Known World by Edward P. Jones come to the English Department main office (Academic Center, Rome Hall 760) right away. We have a few copies that we are willing to part with. They even come with…