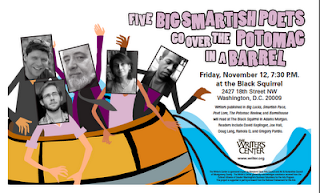 Are you hankering for some intellectual stimulation in between Sara Ahmed‘s fabulous GW English Distinguished Lecture in Literary and Cultural Studies and TemFest II on December 3? Eager for some literary light now that the days are shorter and the sunshine less abundant?

Two events this week should prove just the thing for the mid-November doldrums.

On Wednesday, November 10, writer Todd Hasak-Lowy will read from his latest work. Hasak-Lowy is a professor of Hebrew language and literature who took up creative writing while he was working on his PhD at Berkeley. His debut work was a short story collection, The Task of the Translator, and he published his first novel, Captives, appeared in 2008. Prof. Hasak-Lowy reads at 5:30 p.m. in Alumni House, 1918 F Street, NW. This event is co-sponsored by Classics, Judaic Studies, and English.

On Friday, November 12, two creative writing faculty members–Gregory Pardlo and Ramola D–will be reading their works as part of an event titled “Five Smartish Poets Go Over the Potomac in a Barrel” (see artwork, above). The reading begins at 7:30 at the Black Squirrel in Adams Morgan, 2427 18th Street NW, not far from the Woodley Park metro stop on the Red line.

[fig 1: The IMDb doesn’t know what Dante looks like]by J J Cohen So John Filardi, an alumnus of the GW English Department, is here teaching a course on screenwriting, focused upon comedy. By all accounts it has been a terrific class. Today he invited Emmanuella Chiriqui (Sloan from Entourage) to his class. When I…

As you plan your end of the year giving, we hope that you will keep the GW English Department in mind. Here is some of the faculty research that the generosity of our supporters fosters: Jonathan Gil Harris ·       Shakespeare and Literary Theory (Oxford University Press) to be published in May 2010. Editing collection of essays…

“A few years ago the fund endowed the Jenny McKean Moore Writer-in-Washington to perpetuity. As long as there are creative writing classes at this university, our students and faculty will be able to profit from the presence on campus of writers like the one we showcase tonight.” -Prof. Faye Moskowitz, in opening the 2002-2003 JMM…

The June 2006 edition of By George! includes the following words about two overachieving professors of English, Robert McRuer and Jane Shore: Associate Professor of English Robert McRuer was researching and writing about lesbian and gay studies—or “queer theory”—and AIDS cultural theory when he was asked by a member of his local reading group to…

Seeing Shakespeare rarely conjures up the taste of jerk chicken or the sounds of Bob Marley, but that is not to say that the Bard was not meant for the beaches of the Caribbean. These were exactly Timothy Douglas’ thoughts when directing a Much Ado About Nothing set during the 2009 DC Caribbean Festival at…