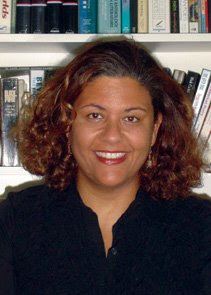 Every president should commence a term in office with poetry.

The arts are too often separated from government, and for no good reason. Only two presidents have invited poets to read from their work during inauguration: John. F. Kennedy (Robert Frost) and Bill Clinton (Maya Angelou, Miller Williams).

Elizabeth Alexander is also the daughter of Adele Alexander, a popular professor of history right here at GW.

You can find a selection of Elizabeth Alexander’s poetry here. I’ll paste one poem (“Islands Number Four,” its title taken from the work of Agnes Martin), from Alexander’s renowned collection Antebellum Dream Book.

Agnes Martin, Islands Number Four,
Repeated ovals on a grid, what appears
To be perfect is handmade, disturbed.
Tobacco brown saturates canvas to burlap,
Clean form from a distance, up close, her hand.
All wrack and bramble to oval and grid.
Hollows in the body, containers for grief.
What looks to be perfect is not perfect.

Description of a Slave Ship, 1789:
Same imperfect ovals, calligraphic hand.
At a distance, pattern. Up close, bodies
Doubled and doubled, serried and stacked
In the manner of galleries in a church,
In full ships on their sides or on each other.
Isle of woe, two-by-two, spoon-fashion,
Not unfrequently found dead in the morning.
Slave-ships, the not-pure, imperfect ovals,
Portholes through which they would never see home,
The flesh rubbed off their shoulders, elbows, hips.
Barracoon, sarcophagus, indestructible grief
Nesting in the hollows of the abdomen.
The slave-ship empty, its cargo landed
And sold for twelve ounces of gold a-piece

The month long GW-British Council residency of novelist, playwright and polymath Suhayl Saadi has come to its end. Dominick Chilcott, the British Deputy Head of Mission, invited some members of the English department, Dean Peg Barratt, and prominent members of the DC diplomatic and arts communities to his home last night to celebrate a second…

It isn’t too late to earn a tax deduction and to help the English Department be the best it can be during 2009. Your contribution directly supports literature and the arts at GW. Follow this link to contribute. Please make sure you check the last category, “Other,” and designate the English Department. Thank you ……

No, that’s not me. That’s the guy who played the Maytag Repairman on TV. More about that later. It’s a pleasure to have been handed the keys to this blog from Jeffrey Cohen, our Department’s Chair Emeritus (a title I have just now invented and summarily bestowed). To be honest, it’s also a bit daunting….

Mr. Aslam was worth the wait! Despite last fall’s disappointment that Mr. Aslam could not arrive as planned, we welcome him now to GW. Tuesday night marked the beginning of the month-long seminar that Mr. Aslam will be conducting for ten undergraduates. The one credit course includes reading three novels by contemporary British authors and…