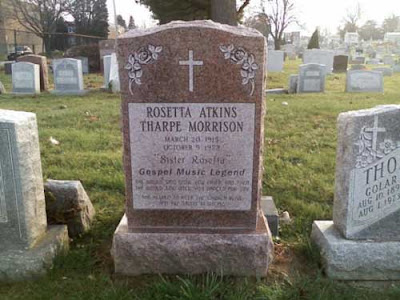 Read all about why this gravestone matters at the website for Professor Gayle Wald’s Shout, Sister, Shout!

Sister Rosetta Tharpe, the pioneering gospel musician and instrumentalist, finally has a gravestone marking her resting place at Northwood Cemetery in Philadelphia. Since her passing in 1973, the gravesite of Sister Rosetta had been a barren plot lacking any memorial. Today, a beautiful, rose-colored monument bears respect to one of America’s most influential artists of the 20th Century.

Sister Rosetta’s monument was partially funded by a benefit concert at the Keswick Theatre in Glenside, PA on January 11, 2008, that featured performances by gospel and spiritual music legends—The Dixie Hummingbirds, Odetta, Marie Knight, Willa Ward, The Johnny Thompson Singers, and The Huff Singers. Additional financial contributions were provided by Philadelphia’s Rhythm & Blues Foundation, and the Blues Foundation in Memphis …

The inscription on the gravestone is from the eulogy by Roxie Moore (living in Baltimore), and the stone was produced by Wertheimer-Liberty Monuments of Southampton, PA. The text reads:

Through its alliance with the Folger Shakespeare Library, the best archive of Shakespeare and Renaissance materials in the US, and one of the best in the world, GW is uniquely positioned to train researchers in early modern and medieval studies. Even Ivy League schools do not have these resources. Here is what we have already:…

Looking into Tim Johnston’s smoky gray eyes, one finds no presumption lurking there. His answers are direct, and he pauses for new questions; his voice is clear and his manner is pleasant. Johnston is the new Jenny McKean Moore Writer-in-Residence Fellow. Profiling a writer is unlike straight biography for, say, a firefighter. There’s the added…