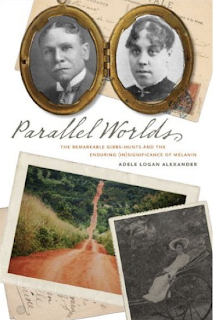 So you’re wondering what to do before the English Department’s BIG READ on February 11 at 4 p.m. in Rome 771? (That event, as you recall, will give you an exclusive audience with the fabulously witty and talented Howard Jacobson, known to Brits as a novelist, newspaper columnist, broadcaster, and all-around public intellectual, and yet curiously underappreciated on this side of the pond.)

Well, we have a suggestion. February will see GWU playing host to a number of events for its Black Heritage Celebration. The impressive line-up features talks, a step show (go if you’ve never seen one), and an opening event exploring Afro-Latino connections in the Americas (of special interest to students who have taken ENGL 40: Literature of the Americas, or studied with English Professors H.G. Carrillo or Tony López).

If you can only attend one event, this blogger’s personal recommendation would be GWU History Prof. Adele Alexander‘s talk based on her book Parallel Worlds: The Remarkable Gibbs-Hunts and the Enduring (In)significance of Melanin. (Melanin is the chemical compound found in humans that largely determines skin pigmentation.) This dual biography traces the story of Ida Alexander Gibbs and William Henry Hunt, a talented couple who traveled the world and knew many of the most significant figures of the 20th century. But since the Hunts were, by U.S. racial definition, black–William had been born into slavery–their opportunities were severely limited. The book narrates their remarkable lives and the difficulties that they confronted because of “race.” 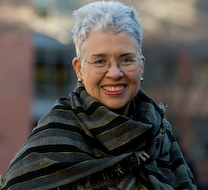 Prof. Alexander, an acclaimed historian and a graceful writer, was recently nominated to serve on the National Council of the Humanities, the body that advises the National Endowment of the Humanities. (In short: a very senior position in the most prestigious national humanities organization.) She is also, not incidentally, the mother of Elizabeth Alexander, the poet who read her poem “Praise Song for the Day” at Pres. Obama’s inauguration.

Prof. Alexander will read from and discuss Parallel Lives on Feb. 4 at 7 p.m. in Marvin 405. If you’re curious about how race operated in the era of Jim Crow–and how the history of the “color line” infiltrates our lives in the age of Obama, this is the talk for you.

Although on sabbatical, professor of American literature Ann Romines has been busy. She writes that the following projects have been her preoccupations: “Why We Read–and Re-read–My Antonia,” talk for National Endowment for the Arts Big Read program, Aurora, IL Oct. 2007. “Letters Home to Red Cloud: Willa Cather Writes to Her Parents.” Western Literature Association….

An “endowed chair” is a professorship awarded as an ultimate honor to a scholar and teacher. We don’t have any in the English department, but hope to possess one some day. Endowing a chair is as easy as writing a check for two and a half million dollars. In case you have that kind of…

With major reviews in the New York Times, the Washington Post, and elsewhere, it would be an understatement to say that Professor Thomas Mallon‘s latest novel, Watergate, is getting lots of attention.  On Wednesday, September 12, from 6-8 PM, a special event will be held for GW Alumni and others interested in hearing Professor Mallon read…

Readers of this blog know that Prof. Robert McRuer has twice taken lucky students in his “Transnational Film Studies and LGBTQ Cultures” to Prague for the annual Czech Gay and Lesbian Film Festival. For GWU students and for Robert, a highlight of the course is getting to know their counterparts in the Czech Republic. Now,…

[beautiful picture of Margaret Soltan by Nick Gingold, Senior Staff Photographer for the GW Hatchet]From today’s Hatchet, an interview with Professor Margaret Soltan:First of all, I wanted to talk to you about American writer David Foster Wallace, what he meant and what his suicide means for the literary world. My sense of it is that,…

This photo was photoshopped for this blog, but only because I took it with my cell phone last year. (It’s still a bit blurry, as you can see.) Remember the wall of Post-It Notes we had on the 7th floor of Rome Hall last year? Well, this is an authentic note that an anonymous student…