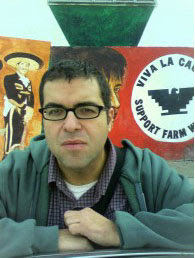 Here is the official press release.

Munoz to Teach and Deliver Public Readings in Fall 2009

WASHINGTON – The George Washington University has named renowned scholar of literature, Latino studies, and performance theory Jose Munoz as the second Wang Visiting Professor in Contemporary English Literature in GW’s Department of English. Munoz, who will be in residence at GW during the 2009 fall semester, will teach two undergraduate literature courses, interact with graduate students and researchers, give a public reading, and sponsor events aimed at expanding GW’s strengths in Latino studies.

“We chose Jose Munoz as our second Wang Visiting Professor because of our department’s commitment to studying literature within a global context,” said English Department Chair Jeffrey J. Cohen. “Dr. Munoz’s work has been path-breaking to the point of being field-defining. Our faculty members have taught his essays and books in our undergraduate and graduate classes. Even I, a medievalist, have made frequent use of his scholarship. Our students will benefit immensely from his presence. The English Department is deeply honored to have a scholar of such international renown join us.”

Munoz added, “I am excited about joining The George Washington University as a Wang Visiting Professor. I look forward to teaching courses that reflect and advance my more recent research on emotion and public life, as well as my ongoing interests in sexuality and race. The prospect of engaging colleagues and students at GW is a very happy one indeed.”

Munoz’s fields of concentration include Latin American studies, film and video, comparative ethnicity, queer theory, gay and lesbian studies, Latino and Latina literature, and performance studies. He has authored several books and articles including Disidentifications: Queers of Color and the Performance of Politics (1999), Cruising Utopia: the Politics and Performance of Queer Futurity (2009), and Feeling Brown: Ethnicity, Affect, and Performance (forthcoming). Munoz currently is the chair of the Department of Performance Studies at New York University’s Tisch School of the Arts.

The visiting professorship was created through a gift by Albert Wang and his family. The gift is one of the largest philanthropic commitments to GW’s Columbian College of Arts and Sciences’ Department of English. The family gift includes support for the Wang Visiting Professorship in Contemporary English Literature and the Wang Endowed Fund in English Literature and Literary Studies, which will fund an annual series of lectures by prominent authors and scholars. Pulitzer Prize-winning author Edward P. Jones was named as the first Wang Visiting Professor in September 2008 and will be in residence during spring 2009.

The English department is an active research community of scholars and creative writers who prize excellence in teaching, publication, and service. The department has about 300 undergraduate majors and an award-winning faculty of more than 30 professors. It is nationally recognized for its strengths in both literature and creative writing. Long known for its expertise in African American literature, the department also is renowned for its research and publication in early modern and medieval studies; ethnic literature, including Asian American and Jewish texts; 19th-century literature; and creative writing. Munoz joins novelist H. G. Carrillo and literary scholar Antonio Lopez in a department that is strengthening studies in Latino literature.

Located in the heart of the nation’s capital, The George Washington University was created by an Act of Congress in 1821. Today, GW is the largest institution of higher education in Washington, D.C. The University offers comprehensive programs of undergraduate and graduate liberal arts study as well as degree programs in medicine, public health, law, engineering, education, business, and international affairs. Each year, GW enrolls a diverse population of undergraduate, graduate, and professional students from all 50 states, the District of Columbia, and more than 130 countries.

GWU’s Jewish Literature Live course (taught by Prof. Faye Moskowitz) and GW’s collaboration with the British Council on its U.K. Writer-in-Residence Program converge for one afternoon only: Friday February 26, 2-4 p.m., Rome Hall 352. What do we mean today when we say “Jewish writing”? Do we mean writers who identify as Jews? Do we…

This feature is the beginning of a story entitled “Baby Danny” by Drew Welke, a student in Ginnie Hartman’s Intermediate Fiction 103 class. Usually, two people would have to stay in the shop late to close up, but today, Jack had been left alone. Everyone else was helping unload tents, tables, and chairs at a…

Dear friends,It has been my pleasure to serve as chair of the GW English Department for the past three and a half years. Now that my term of service is coming to an end, I want to thank you for the support you’ve given me to make this time in office so enjoyable — and…

Jim Miller, the chair of American Studies and a very popular professor of English (he is widely regarded as the sanest member of the department, but that might not be saying all that much) will spend the spring semester at the University of Witwatersrand in Johannesburg, where he will lecture on and research black Atlantic…