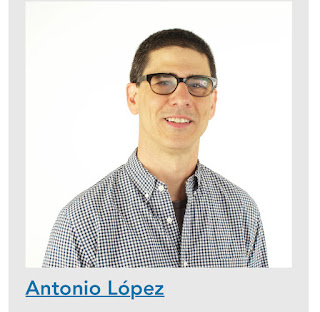 For Latinx Heritage Month, we are celebrating and showcasing the research of Prof. Antonio López, who works on Latinx literature and culture from the colonial era to the contemporary period. He is the author of “Unbecoming Blackness: The Diaspora Cultures of Afro-Cuban America” (New York: New York University Press, 2012). This book won Honorable Mention, Modern Language Association Book Prize in United States Latina and Latino and Chicana and Chicano Literary and Cultural Studies, 2014. Citation: Antonio López’s “Unbecoming Blackness“ shows the demonstrable imprint of Cuban blackness on the cultural history of United States latinidad. With careful attention to performance, theater, archival work, photography, and memoir from the periods before 1959 and after 1980, López’s book offers Latina/o and Chicana/o studies a method for refusing to silence race in the process of archive building, in literary analysis, and in observation of the cultural interactions among African Americans and United States-based Puerto Ricans and Cubans. López’s book nimbly reads across a wide range of genres and cultural forms—journalism, rap lyrics, Miami slang, accounts of the Miami race riot of 1980, proverbs, and testimonio—in a way that teaches us new strategies for bringing literary-critical interpretative tools to the task of reconstructing America cultural history.

Prof. Lopez teaches a range of courses like U.S. Latino Literature & Culture. His current book project considers the literatures and cultures of indigeneity, swamplands, and Cuban diaspora in South Florida.

“IN A PINCH I’D RECOMMEND THE BIBLE FOR DUMMIES TO STUDY FOR THE GRE SUBJECT EXAM.” GW English Alum Christina Katopodis Christina Katopodis, who recently graduated with a degree in English from GW, did a lot of thinking and planning before entering the English PhD program at the CUNY Graduate Center in New York City.  She taught…

GW English extends a hearty congratulations to Professor Renee Calarco, whose play, The Religion Thing, was nominated for a 2013 Helen Hayes Award!  Professor Calarco is nominated in the category of Outstanding New Play or Musical. Since 1983, the Helen Hayes Awards have recognized professional theater in the Washington, D.C. region.  They are named for…

GW English professor Alexa Alice Joubin‘s new book on world literature and intercultural theater draws on theories of aesthetic humanism to explain the force of literature in globalization. The book is entitled Weltliteratur und Welttheater: Ästhetischer Humanismus in der kulturellen Globalisierung. The aestheticization of politics in the twentieth century has structured political life as an…

Raising High & Waving Goodbye: Izzy Cassandra-Newsam graduates with a degree in Creative Writing & English, after completing her fiction thesis under the guidance of Professor Annie Liontas. After this summer, she will return to her native Los Angeles to pursue a career in television. Thank you, Izzy, for everything you’ve provided the department, and…