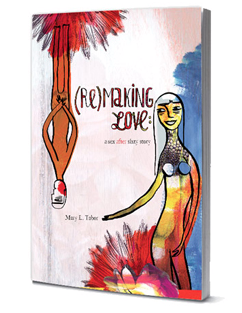 January brings a new year, a new semester, and new faculty accomplishments. This time I have the pleasure of highlighting two books and a BBC documentary.

(Re)Making Love: A Sex After Sixty Story is a new memoir by GWU Creative Writing faculty member Mary Tabor, author of the prize-winning short story collection The Woman Who Never Cooked. A warmly received story of “one woman’s journey that proves it’s never too late to find love—or oneself,” Tabor’s book began as a blog.

According to GW English alumna Sarah Krouse, who took Intermediate Fiction I and II with Mary and reports that she was her “favorite GW professor,” (Re)Making Love “begins with [Tabor’s] marriage falling apart just before her first book was published, and follows her as she crashes and then rebuilds her life. Mary’s honesty and grace in addressing subjects as profound as grief and forgiveness and as accessible as online dating makes her book different from any memoir I’ve experienced.”

Apparently, Real Simple–the magazine with a circulation of 8.5 million (I know, I’ve bought it, although it always makes me feel more, not less, disorganized)–agrees. You can read an illustrated, 3-page profile of Prof. Tabor in the issue on newsstands now; look for it soon online at the Real Simple website. 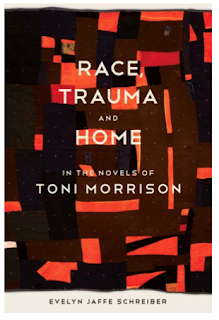 Associate Prof. Evelyn Jaffe Schreiber’s newest book is Race, Trauma and Home in the Novels of Toni Morrison (LSU Press). Discussing all nine of Morrison’s novels, the book analyzes “how
personal and communal trauma is stored in the bodily circuits of individuals” and “how parents pass on trauma to their children in unconscious ways, leading to generational inheritance of trauma.”

An interdisciplinary study, which draws on psychoanalytic, neurobiological, trauma, attachment, and racial theories, Race, Trauma and Home “investigates paths to individual and cultural healing through reparative images of home, recreated through memory.” Prof. Schreiber, a noted Morrison scholar, serves as secretary of the Toni Morrison Society. 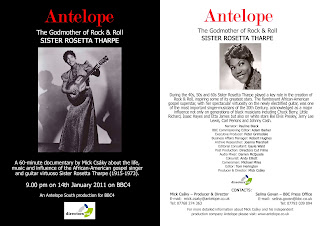 And I’m happy to announce that a new documentary, The Godmother of Rock & Roll: Sister Rosetta Tharpe will premiere on BBC4 in Great Britain on Friday (January 14). Directed and produced by Mick Csaky, who recently discussed Rosetta Tharpe on the BBC’s Today radio show, the film traces gospel phenomenon Rosetta Tharpe’s unconventional and boundary-crossing career.

The film is based on my own Shout, Sister, Shout! The Untold Story of Rock-and-Roll Trailblazer Sister Rosetta Tharpe, and includes me as a talking head. (Until I saw the director’s cut, I didn’t realize I blinked so often. Do TV and film personalities have extraordinary control over their eyelids?)

Here’s hoping The Godmother of Rock will come to PBS soon, and that Queen Latifah–Dana, call me!–will be starring in the Kerry Washington-produced (you, too, Kerry!) film biopic soon.

Congratulations! Earlier this month, it was announced that Tammy Greenwood-Stewart was chosen for the Individual Artist Award for her fiction. The fiction category is offered every other year, and it was Tammy’s second time applying for the grant and her first time receiving the award. Here is a description of the award from the MSAC…

Kyaiera Mistretta, class of 2003, is fondly remembered by her former professors at GW as one of those students whom everyone looks forward to having in class: smart, engaged, perceptive, full of promise. We asked her to let us know what career path she had followed since leaving GW. She writes: Currently I work as…

Professor Jeffrey Cohen writes to tell you about his fantastic Myths of Britain course next fall. There are still a few spots left, so make sure to sign up. You are guaranteed an amazing semester. This was the course that affirmed why I wanted to be an English major! The English Department recently gave my…