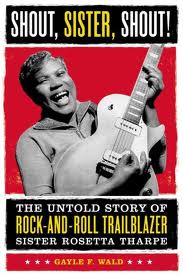 You can watch the trailer, which includes commentary from Professor Wald  here.

As PBS describes the new film, The Godmother of Rock & Roll,

“Southern-born, Chicago-raised and New York-made. She could play the guitar like nobody else… nobody.
Discover the life, music and influence of African-American gospel singer and guitar virtuoso Sister Rosetta Tharpe from writer, producer and director Mick Csaky. During the 1940s-60s, Tharpe introduced the spiritual passion of her gospel music into the secular world of rock ’n’ roll, inspiring some of its greatest stars, including Chuck Berry, Elvis Presley, Jerry Lee Lewis, and Little Richard.
The film features archival performances and new interviews with musicians, producers and friends, including Joe Boyd, tour manager of the 1964 American Folk, Blues and Gospel Caravan; Lottie Henry of The Rosettes; Gordon Stoker of The Jordanaires; Howard Caroll of gospel group The Dixie Hummingbirds, which toured frequently with Tharpe; Anthony Heilbut, gospel record producer and writer; life-long friend Roxie Moore; Ira Tucker, Jr., son of The Dixie Hummingbirds’ Ira Tucker, Sr.; Tharpe biographer Gayle Wald; and others.”
Be sure to tune in for this exciting premiere!

English alumnus Joe Fruscione’s new book The world of GW English has a fantastic new book to add to its already impressive repertoire. Dr. Joseph Fruscione, a GW alum and current faculty member, recently published an extensive dual biography chronicling the competition between two of America’s legendary writers. Faulkner and Hemingway: A Biography of a…

The Jenny McKean Moore Fund was established in honor of the late Jenny Moore, who was a playwrighting student at GW and who left in trust a fund that has, for almost forty years, encouraged the teaching and study of Creative Writing in the English Department, allowing us to bring a poet, novelist, playwright, or creative…

… writes Chloe Rome, a recent GW English major who’s now working at CNN in Atlanta.  “Most people are surprised when I say I was an English major.  But my English degree gave me the shape and structure I needed to succeed in journalism.  I learned how to read something and think critically about it,…

GW Creative Writing and English Professor Frederick Pollack Frederick Pollack is the author of two book-length narrative poems, The Adventure and Happiness, both published by Story Line Press.   GW English is happy to announce that his collection of shorter poems, A Poverty of Words (Prolific Press), will appear in a few weeks. Many other poems of his have appeared in…

GW English Professor Jennifer Chang As we continue our Introducing New Faculty series, we’re excited to introduce you to Jennifer Chang, who will be joining us in the fall, in the Creative Writing Program, as an Assistant Professor of Poetry.  Listed by former poet laureate Rita Dove as one of the young poets she is…