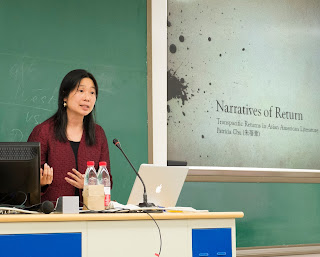 On Wednesday, December 26, I gave a talk for English language and literature students and scholars at Renmin University in Beijing.   The university, also known as People’s University of China, was founded in 1950 as the first national university of the People’s Republic of China.  Its students’ national college entrance exam scores are said to place it among the top 3 universities in the nation, and the campus, with its large central plaza and imposing new buildings, communicates those high standards and expectations.  My host was Professor Xie Jiangnan, who uses the English name Jean, an associate professor of  British drama who shares my love of the plays of George Bernard Shaw.

Drawing on my research on Asian American narratives of return, I focused on the critical concepts of racial melancholia, autobiographical truth, and countermemory in two Chinese North American memoirs, Denise Chong’s 1994 family memoir, The Concubine’s Children: The Story of aChinese Family Living on Two Sides of the Globe, and Yung Wing’s political autobiography published in 1909, My Life in China and America.    In the first half of the talk, I described David L. Eng and Shinhee Han’s concept of “racial melancholia” as arising from an incomplete process of mourning the losses associated with immigration.  Theoretically,  this process of mourning is difficult to terminate because Asian Americans cannot transfer their allegiance to a new object, their host country, due to structural bars to membership and citizenship.  Thus “racial melancholia” is a form of depression conceptualized less as an individual mental condition and more as a response to lasting and unresolved racial discrimination.  (Such melancholia, of course, is not limited to Asian Americans but can be observed in other minorities as well.)  Drawing on the family story of a Chinese Canadian laborer and the young woman he purchased to serve as his concubine in the 1920s, I argued that the couple experienced racial melancholia due to conditions of poverty, race and class discrimination, and (in the concubine’s case) gender exploitation.  Their daughter inherited this melancholia, which left her periodically depressed even as she successfully married, worked her way out of poverty, and raised her family.  However, the couple’s granddaughter, the book’s author, insisted that writing the book, which involved returning to China to research the Chinese history of the family, was more than an act of family therapy:  it was a historical intervention and an act of memorialization.  “It doesn’t matter that my grandparents were paupers when they died, or that Vancouver’s Chinatown has been torn down and rebuilt,” Chong once said, at a conference in Toronto.  “What matters is that they remain alive, here,”–and she held up her book.
In registering the gaps and contradictions among her many sources, Chong  highlighted her own authorial work in constructing the difference between “historical truth,” limited to externally verifiable facts, and “autobiographical truth,” which focuses on the consciousness of the writer.   Out of this discrepancy Chong created a “countermemory” which reframed her grandparents’ story, as George Lipsitz might say, by “bringing it into a new alignment of meaning with the past” (as quoted by Rocio Davis in Relative Histories: Mediating History in Asian American Family Memoirs).
Whereas Chong herself creates a “countermemory” in her text, the memoir of the 19th century Chinese American biographer Yung Wing demands that the critic create a “countermemory” by reading between the lines of his biography.   Yung’s 1909 autobiography, My Life in China and America, described his unique education as the first Chinese man to be educated in New England and graduated from an American university.  Having mastered English, claimed U.S. citizenship in 1952, graduated from Yale in 1954, and returned to China, Mr. Yung proposed and led the first formal educational exchange program between China and America, with the aim of creating a core of Chinese “foreign experts” who could lead China through its desperate transition toward modernity.    I suggested that by reading beyond Yung’s account of his achievements and contemplating the interior experiences implied in his silences, modern readers could discern the stress and racial melancholia that attended Yung’s condition as the only Chinese person of his generation who could see China through American eyes, simultaneously isolated and empowered by his American education, and driven, on behalf of China, both to use and to challenge the very historical forces that had Westernized him. 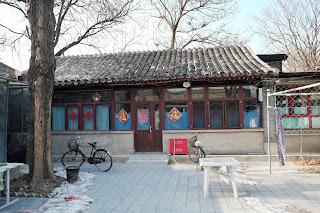 After the talk, which marked my own 4th visit to China, I continued my study of my own roots by visiting and exchanging stories with family members in Shanghai, Hangzhou, and Zhuji.  On my last full day in Beijing, my husband and I visited Beijing University, where my father had completed his M.A. in Chinese history in the 1930s.  Years ago, my father said he had stayed with the famous scholar Hu Shi, the father of Chinese modernism and sometime President of Beijing University, while studying for his grad school entrance exams.  With the help of a scholarly internet posting, a Beijing University reference librarian, and a smart cabbie, we located Dr. Hu’s house in Miliangku Hutong–an alley of gray, one-story brick buildings flanked with new-looking cars–in an older neighborhood behind the Forbidden City.  The owner invited us into the courtyard for a look.  Of the four wings around the central courtyard, one was entirely new; two had been renovated; and last was in its “original” state from the 1930s; but in the wintry cold of Beijing, the present inhabitants had lined the windows with curtains, sheets, and plastic.   It looked like nothing special, but here my dad once talked history, poetry, and politics with Hu Shi, just a few years before the Japanese would arrive, about 25 years before I was born.   We thanked the owner, and he left us there, gawking and talking about the past, and went about his business.

English alumni: GW Magazine wants to hear about the day that you became parents. Since the magazine’s spring issue will be out over Mother’s Day and Father’s Day, the staff thought it would be compelling to open “emotional time capsules” from the day that daughters and sons became mothers and fathers for the first time….

Doing Shakespeare While Black? By Alexa Alice Joubin In Robeson’s Footsteps: Black and Asian Shakespeare Now,  a conference organized by the University of Warwick, January 15, 2016.  Race is an uncomfortable but important topic in our age of globalization. In the art and entertainment industry, race is both visible and invisible in various forms of embodiment….

I rang in the new year in rural West Virginia, far from cell phone towers or, for that matter, a satellite connection to transmit images of the ball dropping in Times Square. Although I felt a bit disconnected from my annual TV ritual, the night sky was dark enough for star-watching, a rarity in Washington…

The Dead The dead are always looking down on us, they say. while we are putting on our shoes or making a sandwich, they are looking down through the glass bottom boats of heaven as they row themselves slowly through eternity. They watch the tops of our heads moving below on earth, and when we…