The GW English Department presents Tony Kushner Live!, a series of programs culminating in Tony Kushner’s visit to the GW campus in April. Please join us, and encourage students, colleagues, and community members to attend these exciting events. Below you will find a full schedule of events. Dates and times will also be posted on the GW English calendar and may occasionally be subject to change for the film and play series. This calendar will be expanded as even more events are added.

Tony Kushner Live! is made possible in conjunction with Jewish Literature Live, the English Department’s course on contemporary Jewish American works of literature that debuted in Spring 2009 and that is now in its fifth year.  Jewish Literature Live is made possible thanks to a significant annual gift from David Bruce Smith; his gift has allowed students, each spring semester, to study and interact directly with prominent Jewish American authors. GW English Professor Faye Moskowitz teaches the course.  This spring, an additional significant gift from David Bruce Smith has made possible Tony Kushner’s visit and the events associated with it.  “We are so grateful for the innumerable ways in which David Bruce Smith’s generosity has deepened the intellectual experience for literally hundreds of students at GW, both in Jewish Literature Live itself and in the numerous public events associated with it.  Tony Kushner’s visit, in particular, will be one of the high points of the year for us,” said English department chair Professor Robert McRuer.
All events associated with Tony Kushner Live! are free and open to the public.  Direct any questions to Ramzi Fawaz at ramzi@gwmail.gwu.edu, program coordinator for the series.
Tony Kushner at Jack Morton Auditorium for public reading and discussion.
April 9, 7:00 PM
No tickets required, but seats will fill up quickly.
ACTING UP: Queer Film and Video in the Time of AIDS
A Joint Production of the GW English Department and American Studies Film Club
All Screenings 6-9pm
Bringing together eight films from the history of queer cinema along with readings from AIDS activists, scholars, and artists, ACTING UP reconstructs the affective and lived experience of the AIDS epidemic from the late 1980s to the end of the 20th century. Our screenings will be introduced and followed by discussions lead by distinguished faculty and graduate students from GW, University of Maryland, College Park, and Georgetown University. The series will especially feature a two-day showing and discussion of the film version of Kushner’s Angels in America.  Our presenters include Christina Hanhardt, Caetlin Benson-Allot, Marilee Lindemann, Matthew Tinkcom, and Ramzi Fawaz among others.

Screenings will be held from 6-9 PM on various Wednesdays and Thursdays. Our Facebook site will be updated with information weekly and will shortly have the location of each screening. Information on how to locate the readings that accompany the films is also forthcoming.  You can join the Facebook page here. 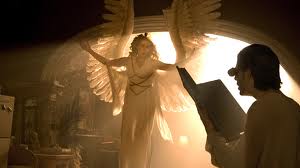 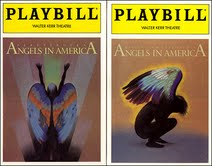 The GW English Department presents “Reading Kushner,” a four session workshop series that will explore four key plays including “Homebody/Kabul,” “Caroline, Or Change,” and both parts of “Angels in America.” Workshops will be faculty and graduate student lead and will include close analysis of the plays themselves as well as short enactments of key scenes by students from Theatre and Dance.
Friday, February 8th, Homebody/Kabul
Friday, March 8th, Caroline, or Change
Friday, March 29th, Angels in America: Millenium Approaches
Friday, April 12th, Angels in America: Perestroika
TBA, workshop on Lincoln.
For readings and additional information on the film series and play workshop series, please e-mail Ramzi Fawaz at ramzi@gwmail.gwu.edu.
“Kushner’s World” Presented by the Department of Theatre and Dance
March 1, 7:30 PM
Performances from Tony Kushner’s plays at Theatre J, 1529 16th Street NW,
Washington D.C.  The evening will be an introduction to and sampling of the playwright’s distinguished
body of work, including Angels in America, Homebody / Kabul, and several adaptations of classic plays.
The event, which is free and open to the public.
Kushner’s Angels and Demons: A Lecture by English Professor Robert Combs
Thursday, March 28, 3 PM in Rome Hall 771
Professor Combs presents his latest work, with special attention to Kushner’s Angels in America.

Join us for a conversation about the representation of BIPOC in Shakespeare’s work and productions.  Saturday, September 26th, 2020 from 3:00pm – 4:30pm Eastern Time (2 – 3:30 pm Central Time) The free event is hosted by the Dallas Public Library and features three speakers: GWU English professor Alexa Alice Joubin (whose book Race examines…

Marissa Ciampi is a recent graduate of our English department  who has come back to offer career advice to undergraduates in a series of workshops  on March 26th, April 2nd, and April 10th.  Since her commencement, Marissa has had a series of adventures that have offered her invaluable experience and insight. Margaret Soltan asked her to…