Name Like an Empty Bag
My house is a mess. Fuck. Fuck. I burned my
sweater on the stove. The smell of melted
acetate, of reading. What if I hate
it just because she does a better job
of being me than I do? Too familiar,
the sound of keeping my mouth closed.
I am wearing cycling gloves. I’d like everyone
to put down their bran muffin for a
moment and consider the peace that comes
from staring into the eyes of dog.
Everybody needs someone to be themselves
around. But the moonlight is not the moon.
Better people buck the sentimental
fake of body I’m no rust or green me
gulp, I gotta. I will let my hair grow
greasy, I am just a woman with her
arms crossed. Feeling better than I was more
quickly than expected. That is usual.
How you come up from a nap and fear
that you will never truly be awake
again. Bed sheets, blankets, Joan-of-Arc-like
clothing, lamp, a ring. The material
fishhook does not cease to be a sex act
don’t be foolish when I tell you
I have loved you just the way you are.
I always wanted to die of consumption.
Nothing truer than a McRib or a
double rainbow. I put garbage in my pockets.
Read a book. Write a letter. Thank you for
the object, for the attitude of grace.
The world is much more tolerant of the
anorectic female head-case. Bravery,
O boring masochism. I will beg
you for your patience, trust, my weirdness
is a side-effect of trying to be
normal, swear, I do my best, loins,
I’ve grown tired of girding you.
Despite I
Empty out I
Sleeping out I
I am attracted to me?
It is fun to sit in me?
I finish the book.
I throw the book away. 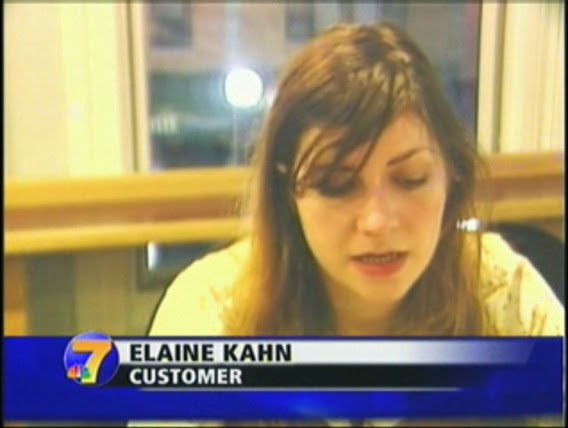 “Name Like an Empty Bag” by Elaine Kahn is a touching poem about a woman who is frustrated with the life she is living. She calls herself and her house a mess. She calls for peace in her world and the world of others. Kahn calls for a suspension of appearances. She goes on to point out that she won’t shower and she feels great not having to look good for others. At a certain point in the poem she begins to talk to herself as if she were a separate entity, She talks about how she (herself) needs to wake up and love herself for who she is. In doing that she needs to love what she does, whether it be eating or collecting scraps or reading and writing. She tells herself that the real world is much more appreciative of who she is now, but if she loved herself the world may not accept that. She finishes the poem with a series of questions about herself. Having transitioned back into her being, she is asking these questions to herself. Is she attracted to herself? Is it fun to be her?
Kahn’s writing style is very refreshing. She is very quick to use enjambment so that the first words and the last words on each line have their own punch to them. Also very interesting is her use of questions throughout the poem. The questions are concentrated around the beginning and end of the poem where she is switching persons. She is switching out of her body and talking about herself from outside herself. The poem proceeds in free verse; there is no rhyme scheme or constant meter. The poem flows in a different way. The enjambment, while still having the effects mentioned above, aids the flow of the poem in such a way that each sentence leads into the other. While reading this over and over again, I found myself noticing when sentences ended at the end of a line. These lines were usually the most impactful.
The title is a very key operator in the poem. The title “Name Like an Empty Bag” sets a lens through which the reader has to read the poem. The poem never provides the reader with a name to this character that is so thoroughly discussed. That is reflective of the title. The title equates a name to an empty paper bag; a worthless object with no meaning and next to no use. It’s just used to carry things in and to give other objects to other people. There is no lasting meaning to a paper bag and that is how the reader is to perceive this speaker’s view of herself.
— Nelo Keith Lang
Nelo Keith Lang is a freshman in the Columbian College who aspires to become a high school teacher. He hails from the and only Brooklyn, New Yor

On January 24-26, GW was the proud host of the university’s first Digital Humanities Symposium  Patty Chu and Peter Feng After all the excitement, some of the symposium participants spoke about the purpose of the symposium, how they became involved, and what digital technology could mean for the future of multiple fields (such as our…

Toni Morrison at GWU, September 21, 2011 Nobel Laureate and Pulitzer Prize Winner Toni Morrison died August 5 at the age of 88.  Professor Evelyn Schreiber, a specialist in Morrison’s work and former president of the Toni Morrison Society, was interviewed On August 8 on the Kojo Nnamdi show about Morrison’s legacy.  You can…

We at GW English hope that your Thanksgiving Break is a restful one surrounded by loved ones … and perhaps curled up with some of those books you’ve been wanting to read!  We’ll see you next week. Share on FacebookTweet

We are pleased to announce that Composing Disability, GW’s biennial Disability Studies conference, returns on March 22-23, 2018. The full program will be posted soon, and the keynote for this event is UK-based artist-activist Liz Crow. Crow is the founder of Roaring Girl Productions and works with performance, film, audio, and text. Her work has…