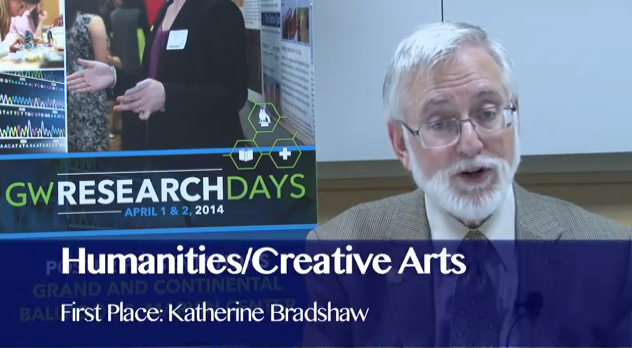 Katherine is majoring in English as well as Classics and has been working on her Luther Rice Fellowship project, which focuses on another Shakespearean work, Coriolanus. Professor Alexa Alice Joubin was Katherine’s mentor for her successful project and continues to aid her as she delves into Coriolanus.

I was able to sit down with Katherine and discuss her research project as well as some of plans for the future.
How would you summarize the point of your Research Day project?
For this project, I looked at the anonymous 16th Century play King Leir, William Shakespeare’s King Lear, and Sir Trevor Nunn’s 2008 filmed adaptation of King Lear starring Sir Ian McKellen in the title role. I focused on the character of the Leir/Lear’s loving youngest daughter Cordella/Cordelia to explore each work’s perspective on the nature and motivation of a daughter’s duty (responsibility) to her father. I had the opportunity to conduct archival and textual research both here at GW and at the Shakespeare Birthplace Trust Library and Archive in England. My study concluded that, taken together, the three works form a trans-temporal arc from gratitude-based obligation, through unconditional love, and finally to emotional pity, showcasing the changes in notions of filial duty over time. 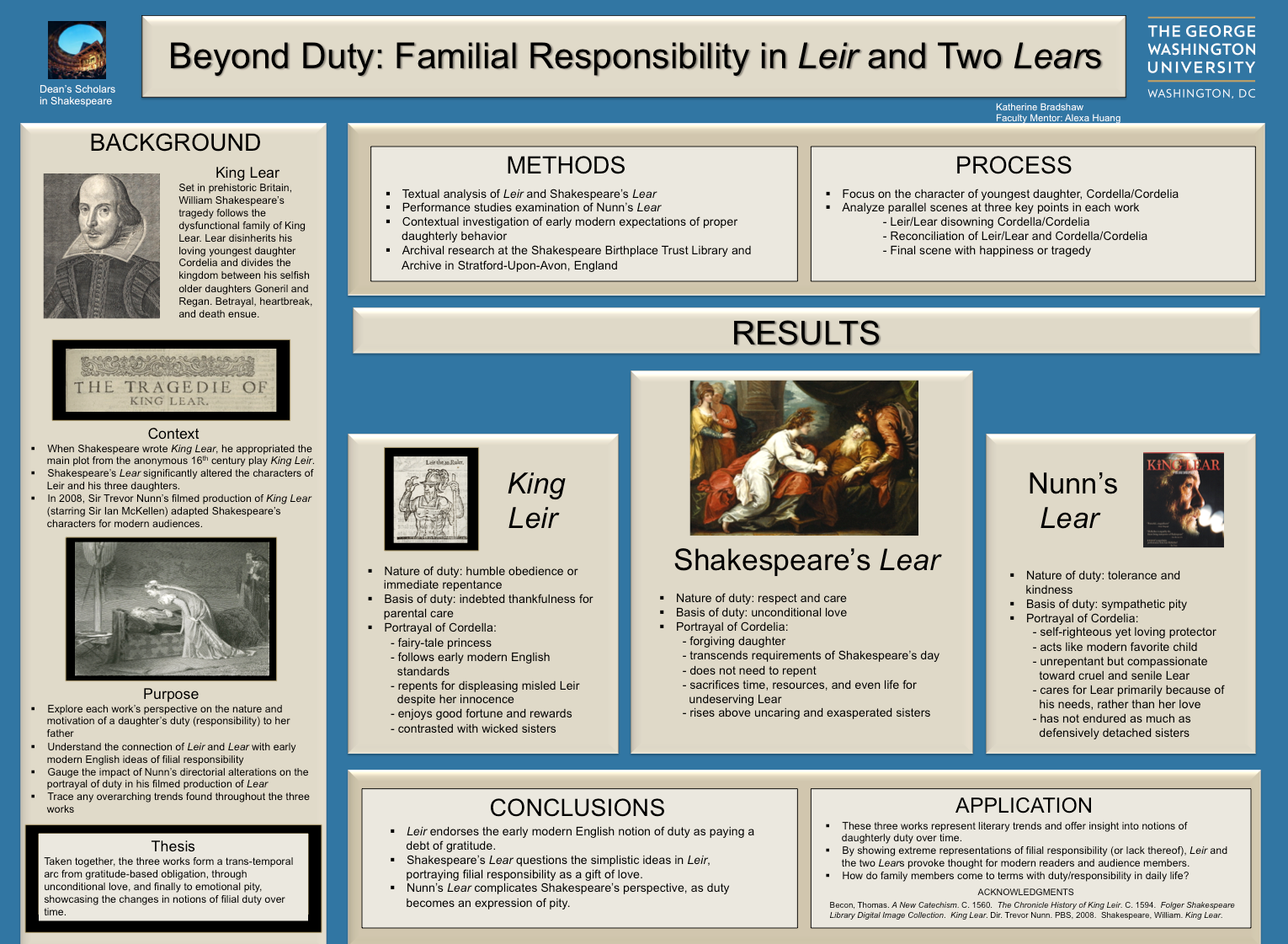 I have to ask, what particularly drew you to Shakespeare?
Wow! There are so many things. Just to give a bit of context, I’ve been a Shakespeare enthusiast since age seven, so my reasons have changed over the years. Back then, I enjoyed his comedies, and I think I was subconsciously drawn to the sound of his language. I still love the auditory beauty and intricacy of how he strings words together. But as I’ve grown older, I’ve become more and more interested in his compelling portrayals of human nature and human struggles. Using often extreme representations and circumstances, Shakespeare’s plays and poetry explore themes that apply to each of our lives in their own way, and that’s why I like to study his works.
How did you come up with your idea for Research Day? Did it stem at all from your Luther Rice Fellowship work on Shakespeare’s Coriolanus?
I’ve been fascinated by the topic of duty and responsibility ever since I read Vergil’s Aeneid in my high school Latin class, because that poem is basically an exploration of duty – pietas in Latin. This Research Days project grew out of a combination of my interest in duty and a desire to study Cordelia’s character. During freshman year, I created a term project on how Shakespeare adapted the character of Cordella/Cordelia to question early modern standards of daughterly duty. This year, with the support of my faculty mentor Alexa Alice Joubin, I wanted to expand on that research to understand the connections that the early modern plays have with a modern adaptation. Nunn’s King Lear is quite captivating because it emphasizes the complexity of Shakespeare’s characters, so that production was an easy choice. The Research Days project flowed from there.
Are you hoping to continue your work on King Lear?
Definitely. I focused on the character of Cordella/Cordelia in this project, and I’d like to more closely examine the characters of her older sisters, Gonoril/Goneril and Ragan/Regan as examples of duty (or rather lack thereof).
What are you hoping to work on in the future? Are you brainstorming any new projects?
Well, my Luther Rice Fellowship on Coriolanus will be my main focus in the coming months. For the long term, since I’m a Classics and English double major, I’d like to continue combining my two fields of interest, analyzing each of Shakespeare’s Greco-Roman plays and poems in depth. I’m still trying to decide which ones to study next.

English major Jina Park published an essay in GW Hatchet in which she details how GW prepared her for the unexpected final semester of her college career due to the coronavirus situation. Jina is currently taking the Critical Theory seminar which explores many issues related to the current crisis. In her essay, Jina shared tips on how to manage…

Professor Marshall Alcorn’s book Resistance to Learning: Overcoming the Desire-Not-To-Know in Classroom Teaching was published in September of this year by Palgrave Macmillan. Resistance to Learning has already received high praise and is the latest in Professor Alcorn’s works that focus on education. As our semester was winding down, GW English Communications Liaison Samantha Yakas asked him…

This is the inaugural post of On the Road, an occasional blog series about GW English Professors and their scholarly travel. In an age of Skype and video conferencing, travel to conferences or to other institutions remains an important way for scholars to share their work and learn about what their colleagues elsewhere are doing…