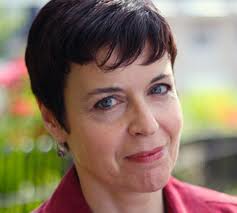 GW English extends a hearty congratulations to Professor Renee Calarco, whose play, The Religion Thing, was nominated for a 2013 Helen Hayes Award!  Professor Calarco is nominated in the category of Outstanding New Play or Musical.

Since 1983, the Helen Hayes Awards have recognized professional theater in the Washington, D.C. region.  They are named for the famous actress Helen Hayes, sometimes known as “the First Lady of the American Theatre.”  The full list of 2013 nominations can be accessed here.

“Faith can bind people together under the banner of common belief, or it can create deep rifts, irreconcilable by way of reason or shared history. In Theater J’s lovingly crafted production of Renee Calarco’s The Religion Thing, a polished cast navigates the playwright’s meditation upon the complex role of faith in relationships, marked by a heady brew of razor sharp humor, repressed secrets, and raw emotion.”

The 2013 Helen Hayes Award winners will be announced at a ceremony at the Warner Theater on April 8, 2013.

GW English Professor Ayanna Thompson We are happy to roll out a new series for this blog, Introducing New Faculty.  Over the next few weeks, you’ll meet everyone who will be joining us in Fall 2013.  The Department of English is ecstatic to have three new faculty members joining us in the fall, along with…

Gabriel Muller, an English minor who graduated in 2013, is working for Atlantic Media here in DC (in the Watergate building, in fact). Below, he shares his thoughts about school and after school.  I majored in History with minors in English and Philosophy – the humanities trifecta. For the hesitant humanists out there who think…

GW English Professor Jung Yun GW English is excited to introduce you to Jung Yun, who will be joining our faculty in the fall as an Assistant Professor of Creative Writing, with a specialty in fiction.  Professor Yun comes to us from the University of Massachusetts at Amherst, where she received her MFA and where…