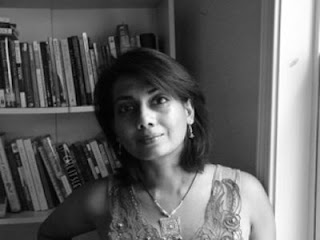 The room was packed. Students watched as the head of the Creative Writing Department, Faye Moskowitz, ran around trying to find enough chairs to seat all 225 people who came to last night’s final reading featuring professors Ramola D and Gina Welch. The event is a record in not just the Creative Writing Department’s history, but also the English Department’s. The turnout has not been this amazing since Michael Chabon’s reading last spring, but with these two talented and well loved women on our faculty, it is almost no surprise that their “fans” came out in full force yesterday.

The event was also special because it featured the students of these two popular creative writing professors. Freshman Juliana Stern introduced the eloquent Ramola D. Stern noted how much her writing has improved within this one semester since she has taken a class with Ramola. “Ramola successfully brought out the best writing I could ever write,” she said. Ramola’s collection of short stories Temporary Lives (Univ. of Massachusetts Press) has won many prestigious awards, including the AWP Grace Paley Prize in Short Fiction. Naturally, she read the title short story in the collection, one that expressed a startling revelation in her family’s history, the discovery that her Christian grandfather had converted to Islam and had a second wife. The story was a shock to Ramola, who said, “I knew my grandmother as very stoic, long suffering, and very giving. Her life seemed to revolve around the household and family. I wrote this story in an attempt to understand her and her life.” Ramola’s story was heartbreaking and beautiful and its discussion of religious identity fit well with Welch’s book.

Senior (and English Department secretary) Sasha Moss proceeded to introduce Welch. After listing Welch’s many accomplishments–including having her recent publication named book-of-the-month by Oprah Winfrey’s O Magazine, Moss related her personal relationship with the writer. “I know her more as a professor and a friend,” she said. Moss remembered the day the two met in the department office when she accidentally mistook Welch for a student. “I thought, who is this woman who looks like she is 22 telling me what to do,” Moss said. Today Moss sees Welch differently. She said, “Gina taught me how to really appreciate individuals for who they are… She is who I look up to and to whom I am honored and humbled to sit next to.” Moss and Welch hugged as Welch came up to the stage to discuss her book In the Land of Believers, about her time spent at the Evangelical church, Thomas Road Baptist Church.

Welch noted she was honored to go after Ramola and then contrasted her religious upbringing with Ramola’s. “I come from a long proud line of atheists… My normative gaze was thinking atheists were in the right,” she said. Welch grew up in the Bay Area of California with absolutely no religious people in her life. However, when she moved to Virginia for graduate school, she was taken aback by the Christian presence she felt. “I was surprised to find that I felt antagonistic toward them. I was afraid of them. I was surprised this was coming from me, a Berkeley native,” she said. So Welch undertook a two-year undercover project in Jerry Falwell’s church in Lynchburg, Virginia. She read three snippets from her book, garnering laughs and hard hitting questions from the audience.

Last night was the final reading for the year and it is safe to say, it could not have gone better!

Congratulations to Professor Kavita Daiya, who has recently published her book Violent Belongings: Partition, Gender, and Postcolonial Nationalism in India. Professor Daiya answered a few questions for me about her book, which should be of great interest to students of many disciplines, not just English. How did the research for Violent Belongings begin? Did the…

What is the subject of your dissertation and how did you decide what your topic would be?   My dissertation is about paratexts – all the stuff that’s not technically part of the “main” text but that serves to present it in some way.  Titles are paratexts, as are introductions, footnotes, endnotes, appendices, etc.  More specifically, I…

Jenny McKean Moore seminar alum and author Paul Steinberg “A Salamander’s Tale is about Drugs, Sex, Lust, Rock ‘N Roll, Time, and Death” Paul Steinberg, a longtime psychiatrist in Washington, graduated from GW’s Jenny McKean Moore seminar.  His book, A Salamander’s Tale: Regeneration and Redemption in Facing Prostate Cancer, comes out next April.  We talked to him about…

Recently Prof. Robert McRuer was interviewed by “Pushing Limits,” a radio show by and for people with disabilities produced by KPFA in Berkeley, California. The show airs twice monthly in the Bay Area and is available as an online broadcast. The segment in question, which is available for listening here, focused on influential American…