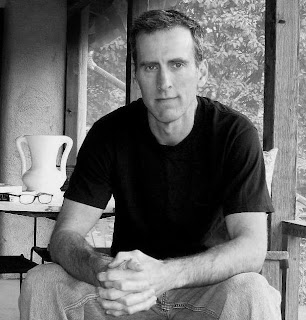 Looking into Tim Johnston’s smoky gray eyes, one finds no presumption lurking there. His answers are direct, and he pauses for new questions; his voice is clear and his manner is pleasant. Johnston is the new Jenny McKean Moore Writer-in-Residence Fellow.

Profiling a writer is unlike straight biography for, say, a firefighter. There’s the added wrinkle of a body of writing to think about. There are many approaches to take in profiling a writer. One approach, the one most writers are critical of, is the biographical approach: understanding the figure behind the page through the subject’s experiences–without the page. Another approach is to open up the writer’s life through the work he or she produces. The writer would probably prefer he or she was never opened up in the first place, but that is the tension inherent in a biography–between the biographer trying to reveal, and the subject trying to abstract. The latter approach is the most arduous.

A writer once said that all writing is about a lack. Ernest Hemingway put this into practice the best, using his “iceberg” approach to writing, by revealing only what was starkly visible in the narrative and hinting at the larger, turbulent forces roiling the surface of the water; the effects of which we can all see but are unable to discern. Hemingway kept his prose tight and free from ornament. A seemingly innocuous passage from Tim Johnston’s short story “Two Years”, an exchange between the protagonist Grant and the waitress Maria, demonstrates his dexterity with this technique:

She said, ‘I’m sorry, I’m overstepping.’
‘No, you’re not.’
‘I’m taking advantage of the circumstances.’
‘Which circumstances?’
‘She glanced at him, and looked back to the road.’

And a few paragraphs further, in response to Maria’s question about his amputated fingers:

These are some of the most tense moments in the narrative but Johnston deftly withholds as much as possible, dangling the characters’ histories over the readers’ heads like a sprig of mistletoe held by someone you are burning to kiss, who is also being a little too glib about it. That’s the substrate of narrative, the sleight of hand, the thing that divides the journeyman writer from the apprentice, which Johnston has found.

“As I’ve gotten older and more confident,” he says of his technique, “and just plain better as a writer of fiction, my fiction has become less and less autobiographical on the surface.” Johnston admits to having a visceral reaction to seeing himself lurking at the edge of his writing. “I get kind of nauseated whenever I feel myself writing about a character who resembles myself too closely,” he says, “and the moment that happens I will jettison the voice, or the character, or else change him or his story so dramatically as to make him alien and interesting to me.”

Johnston spent many years as a carpenter, so his craftsmanship with words should come as no surprise to the reader. “Like writing, carpentry is about building,” he says. “About taking care, about taking raw materials and making things at once beautiful and solid. You learn an appreciation for grain, for the sharpness of tools and for the keenness of your eye and your fingertips.”

His interest is in teaching fiction and fiction writing. Part of his responsibilities as the Jenny McKean Moore fellow is teaching a workshop for students and for local residents. The syllabus for his workshop reads like a recipe for a good peach pie, as precise as a work manual: “We begin with the agreement that reading–and understanding–great fiction is an educational bedrock for anyone who wishes to create it…We will be frankly but humanely honest, impassioned with compassion, aware that the time and care we put into the stories of our peers is not only the lifeblood of the workshop, but will also be generously repaid in kind.”

Johnston’s collection of short stories, Irish Girl, won the 2009 Katherine Ann Porter Prize in Short Fiction. The eponymous story in the collection garnered him the O. Henry Prize in 2002. Author David Sedaris listed the collection as one of his favorite reads that year and promoted the book on his U.S. tour, including Irish Girl in his anthology of favorite stories Children Playing Before a Statue of Hercules. Johnston wrote a humorous article about the experience for Salon.com last May entitled “When You Are Engulfed by David Sedaris.” (It’s worth a read)

Last night (September 14), Johnston read a portion of his upcoming novel The Next Hour as part of the Jenny McKean Moore series to a small crowd of bibliophiles and creative writing geeks in the School of Media and Public Affairs. The title of the novel, Johnston said, comes from an Arthur Schopenhauer quote: “Every possession and every happiness is but lent by chance for an uncertain time, and may therefore be demanded back the next hour.” I suspect that he feels the same about his own fame–a trait that is essential to modesty.

The inevitable question about motivation Johnston answers with verve and humility, right down to the last rivet, the last substance. “Great writing drives me,” says Johnston. “Great stories and novels. Sentences I never want to forget. I’m driven by the deep and incomparable sense of well-being and rightness that fills me when I am working intensely on some story, or novel, or sentence.”

Prof. Schreiber toasts Toni Morrison (seated, at left) at her birthday celebration at the Library of Congress last week. This guest post is from Prof. Evelyn Schreiber.   On Feb. 18, Profs. Evelyn Schreiber, Jennifer James, and H.C. Carrillo attended the 80th Birthday Reception for Nobel Prize-winning novelist Toni Morrison at the Madison Hall of…

Michael Chabon is many things. A 45 year old male. A Pulitzer Prize-winner. A Jewish-American author. A true geek. The author, best known for 2000’s The Amazing Adventures of Kavalier and Clay, doesn’t like to be referred to by a single, restrictive label. Multiple labels he can tolerate, however. If you keep up with this…

For most graduate students, getting a PhD will be their greatest recent accomplishment. However when Tariq Al-Hayder came to study at GW he was not only a teacher, but a published novelist as well. Originally hailing from Saudi Arabia, Al-Hayder taught English at King Saud University in Riyadh for a year. Whether in the classroom…

Congratulations to Tom Mallon for the excellent review of Yours Ever: People and their Letters in the New York Times Review of Books. An excerpt: It is next to impossible to read these pages without mourning the whole apparatus of distance, without experiencing a deep and plangent longing for the airmail envelope, the sweetest shade…