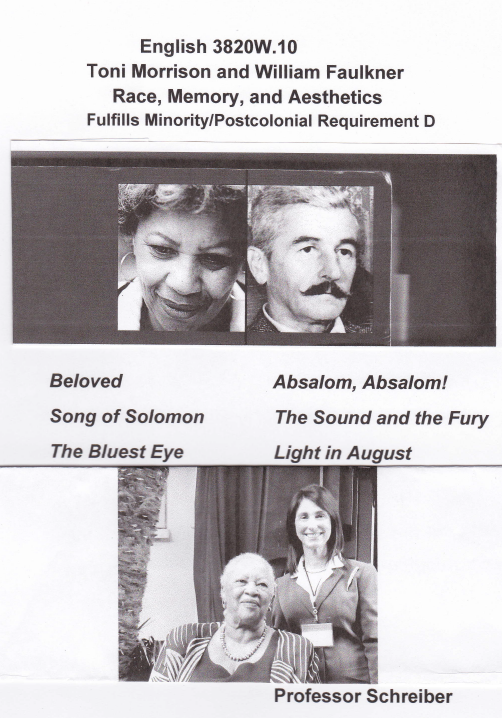 English 3820W.10, CRN 42671, “William Faulkner and Toni Morrison:  Race, Memory, and Aesthetics”
Major Authors: Toni Morrison and William Faulkner: “Race, Memory, and Aesthetics” : This course links authors Toni Morrison and William Faulkner through the ways in which their fictional and discursive practices reflect on each other.  Specifically, we will examine how the texts of both authors reenact and resist racism and patriarchal structures; how they explore the ways in which memory and the past construct identity; and how they experiment with style.  We will consider the ways in which the texts illuminate a continuum in American literature through discussions of socially constructed identity and issues of race, class, and gender.  In addition, the class utilizes cultural studies and psychoanalytic critical approaches to the texts of these authors.  The reading list includes Beloved, Song of Solomon, The Bluest Eye, Absalom, Absalom!, The Sound and the Fury, and Light in August.
This course fulfills the Minority or Postcolonial Literatures (d) requirement for English Majors.

Check out some of the exciting new courses this coming semester from British Modernism to disability in the Middle Ages. Share on FacebookTweet