Join us on Monday for a screening of
The Line Has Shattered,
a documentary on the 1963 Vancouver Poetry Conference with the Director, Robert McTavish.
Where: Gelman Library, Room 214
2130 H Street, Washington, DC 20052
When: 7 p.m. – 9 p.m. 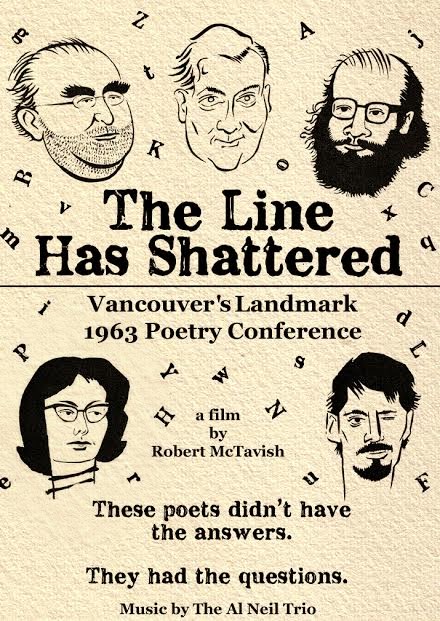 RSVP Required. Email cathye@gwu.edu
“The Line Has Shattered is an invaluable teaching tool as well as a fascinating sketch of the community that came together for the legendary Vancouver Poetry Conference. Historians, poets, and lovers of poetry must give thanks to director Robert McTavish for rescuing rare footage from the archives and contextualizing the socio-political landscape that informed North American experimental poetry in the mid-1960s. This documentary does much to explain the trajectory of the Open Field practices that began with the San Francisco Renaissance and unfurled from coast to coast for the next five decades.”
– Lisa Jarnot, Poet and author of Robert Duncan: The Ambassador from Venus (University of California Press, 2012)
About Robert McTavishRobert McTavish holds degrees in English (Simon Fraser University) and Journalism (University of Regina). He has made all of Non-Inferno Media’s documentaries, as well as freelance writing, film, and radio work – including the recent Phyllis Webb: The Art of Ideas for IDEAS on CBC Radio. He also edited A Long Continual Argument: The Selected Poems of John Newlove for Chaudiere Books (Ottawa, 2007).

The GWU English Department & The Jenny McKean Moore Reading Series invite you to a reading by Scott Simon. NPR’s Scott Simon The event will be held:  Thursday, October 29th  7:30 PM  Gelman Library Room 702 Scott Simon is known as a broadcast journalist.  He is, after all, the award-winning host of NPR’s Weekend Edition…

Helen Deutsch, Department of English, UCLA The Wang Distinguished Lecture in Literary and Cultural Studies will be presented this year by Helen Deutsch, Professor of English at UCLA.  Professor Deutsch will be in residency at GW September 18-19, and will deliver a lecture titled “Savage Indignation: Jonathan Swift, Edward Said and the Demands of Late Style.”…

A PSA from one of GW’s literary magazines: Le Culte du Moi Winter Issue Launch Party Wednesday, February 4th @ 7pm Mitchell Hall Theatre Free and open to the public Get a free copy of the Winter 2008 issue, share your writings at an open mic, and enjoy French food. We’re not pretentious. We’re post-tentious….