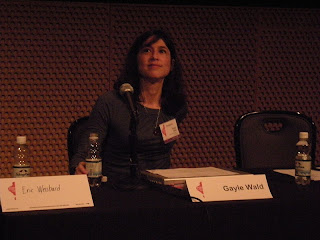 Gayle Wald wants you to know that her office door is always open. As the new department chair after January 1, 2010, Wald hopes to bridge the imaginary gap between faculty and students. “I want to engage the undergraduate majors. To give them a feeling of belonging to something through events and enhanced advising,” she said. “It’s also important that we do what we can to foster a graduate student community.”

Wald only sees herself as building off of an already strong department. “I’m not coming in with an agenda. We’re in a good place right now. The faculty is really strong and the student satisfaction is high,” she said. Yet changing leadership is vital to a department, she said, “It’s good to have new ideas and new leadership.” As the deputy chair for the past three years Wald has been acting almost as a “vice president” as she puts it, mostly working with promotions of faculty.

Now as the new department chair, she sees it as her time to help the people who have helped her all along. “I have been here since 1995,” she said. “This department has been really supportive and I have respect for my colleagues. It’s nice to have the opportunity to give back and be in the position to give opportunities to faculty members.” Wald is aware the job will have its challenges, but she is eager to work with everyone.

One if Wald’s duties will be keeping the faculty happy. “We have an incredibly ambitious research active faculty. So I will try to provide resources for the faculty to pursue that research,” she said. This new administrative position does not mean that Wald will be absent from the classroom. Department chairs typically teach undergraduates every year through the English 40W courses such as Jeffrey Cohen’s Myths of Britain and Wald’s eventual Literature of the Americas course.

Though Wald hopes to see students outside of the classroom, as mentioned above, she intends to increase the interaction between students and the department. Wald believes many students do not realize there is a very welcoming intellectual niche within the department. She said, “One thing that disappoints me is when I see potential English majors who want to transfer. It is often because they do not have the intellectual cohort they need.”

Although she will do her best to curb the intellectual isolation, Wald also emphasizes that students need to be proactive as well. “Students under use professors as resources. They seem to be intimidated and shy, but they do not need a reason to come to office hours,” she said. However professors are not the only resource in a departmental niche. “Students often are the best advisers to other students,” she said. “I advise students to talk to friends they trust.”

Wald herself found an intellectual cohort like the one she describes during graduate school at Princeton. “There was a lot of intellectual energy towards black culture so there was a cohort of graduate students interested in the same things,” she said. This lead Wald to her current research on Black culture studies, a topic she says bridges English and American Studies. Currently she is on sabbatical to research her new book on a significant black television program, “Soul!,” on PBS from 1968-73. “It was a groundbreaking black variety show. It was broadcast at a time when there was few opportunities for black thinkers to appear on TV,” she said. The project naturally developed after she finished her book on Rosetta Tharpe and has been captivating her interests ever since.

Though Wald may not be in the office right now, we look forward to seeing her next semester. And we hope to see you at one of her many department events!

[Bagel photos by Tess Malone. Photo of Connie Kibler & Tess Malone by Jeffrey Cohen] Shouldn’t you be in Rome 760 right now? You should be sitting in that third chair in the photo. Enjoying a delicious bagel provided by the wonderful Gayle Wald, wearing your incredibly dorky, but awesome English t-shirt, and generally reveling…

The Knicknackery, a new literary magazine was started by Keren Veisblatt Toledano ’09 and Sonja Vitow ’09, former editors of GW literary publication le culte du moi.  Keren and Sonja wrote in to describe their new venture: “THE KNICKNACKERY IS A COLLECTION OF SMALL, ECLECTIC THINGS. SO ARE WE. We’re looking for work that plays jump rope…

“Raising High & Saying Goodbye: Rebecca Radillo is a graduating senior majoring in English. She currently has an internship with TheDailyFandom.org where she writes on pop culture with an academic lens–she already has an article published analyzing Doctor Strange through an Orientalist and disability lens. She will be attending Boston College in the fall for…

“Sharing my work [at GW], and reading the work of others, critiquing and being constructively critiqued, got me thinking about aspects of writing fiction that I had never thought of before.” – An interview with GW grad Elizabeth Stephens. Elizabeth Stevens has just published her first novel, Population 1. I’m as intrigued by your life story…