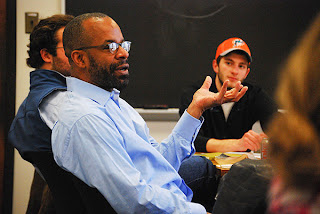 Recently we blogged about the news that RateMyProfessors.com may be a relatively reliable indication of students’ assessments of their professors, contrary to what some of us thought.

Here is a teaching”assessment” of the old-fashioned sort. The subject is Assistant Prof. H.G. Carrillo. The author is senior Joe Mancinik, who officially closes out this semester as student blogger.

On any given afternoon turn a corner on the seventh floor of Rome Hall and you’ll probably hear the question, at once so terrifying to creative writing majors everywhere, pronounced with a heavy emphasis on the last syllable, “What does it do?” Now, granted, you may not know what “it” is, or what it might be doing (it is probably not doing much), but you will have the feeling that it needs to do much more; and you would be right.

If you happen to turn that corner and peak into the office from which this terrifying verb is emanating you’ll likely see a shivering form seated in a chair in the center of the room. Fingernails digging into the chair’s arms, the figure dodges books flung from shelves upon which they were formerly clinging. A man is seated at a computer shoved against the wall. His desk is overflowing with books steepled in the center, making librarians everywhere cringe. Wearing blue jeans, a long-sleeve white shirt, and impeccably-shined black boots, the man is thumbing through a sheaf of papers. Like cigarette ash the leftover pages drift to the floor. Pay attention; blink a few times. Be a good observer, as Ernest Hemingway once admonished. For amidst this swirling elixir of agony, books, and manuscripts magic is occurring. To have sat in this chair, as the author has on many occasions, leaves one panting both in exasperation and anticipation, as the man digresses from comments on the style of Swann’s Way, a viral video on YouTube, the role of the paragraph break in narrative, the brilliance of John Updike, the charm of Flannery O’Connor’s racist characters, and the latest episode of Glee. Topics to be avoided are the works of Jane Austen, paragraph breaks in the narrative, and the latest episode of Glee.
The man, of course, is Professor Hache (pronounced as “H” in Spanish) Carrillo. What he asks of young writers that is at first so dreaded to the novice is the most important question for all of us: What is your story doing? How is your story working within the framework you have created? Creation, that is what he is asking of his tutelage. Wilted roses mean something much more to him if that is the image the writer decides upon. Books are not flung from his shelves in anger. They are maps. Find your way. Have a voice! As with all the most magical teachers he gives very few few guided suggestions. And he is a magician. And a teacher. And a writer, escritor. (To see how these multiple forms can exist–teacher, writer, language–in one form, within, read Hache’s beautiful debut novel Loosing My Espanish)

So come prepared to defend your work. He asks nothing less. I could dwell on the number of times he has said that one word, that one phrase (The work is bigger than us, he says softly, as I hold the phone between my legs watching the little red slivers break out on my knuckles), which turned me back from whatever abyss I was staring into. It is not exaggeration to say that he has taught me everything I know about writing, by first teaching me everything that I didn’t know. Did I do all of this for nothing? he recalls of his own formative experiences as a writer, but the message is unmistakable.

So how can I ever describe my teacher, my friend, my inspiration? What does it do?
I just did.

This Dean’s seminar takes advantage of the theater offerings in Washington and asks the question:  What is new about new plays?  Are contemporary playwrights reworking classical themes or are their works entirely new entities?  What themes reappear and how are they presented?  The course also considers how classical plays are re-imagined for modern audiences. …

Spring 2012 is the first semester in which English will be offering ENGL 3965, a new topics course in Asian American Cultural Studies. Next semester, Prof. Patty Chu–known to many majors as our Director of Undergraduate Advising (she probably signed you up for the major!)–will be teaching the inaugural course under this new rubric.  As…

Chuck Frank, GW English BA ’74 GW English Alum Charles “Chuck” Frank (BA, 1974) was recently featured on the GW Impact blog for his important philanthrophic work, particularly his establishment of The Charles and Deborah Frank Fund for Veterans Studying Sustainability.  You can read the entire piece here.  This excerpt provides a summary of Frank’s…

Two exciting new course additions are being offered on Shakespeare for the Spring 2017 semester: Come sharpen your skills of analyzing stories the society tells about itself. The world is made up of stories. Stories full of sound and fury. Great stories are often strangers at home. One of the greatest storytellers is Shakespeare. His…