GW English’s fabulous alumni continue to win award and make headlines. The latest: GW PhD Dolen Perkins-Valdez is this recipient of a First Novelist Award given by the Black Caucus of the American Library Association. The award, which was presented at the Association’s recent San Diego meeting, honors Perkins-Valdez for Wench (HarperCollins, 2010).

According to the ALA, Wench “captures the complexities of the relationships between enslaved women and their masters in her debut novel…. Perkins-Valdez has written an engaging and thought-provoking novel which examines another aspect of complicated relationships resulting from slavery.”

Wench is now out in paperback. Congratulations,  Dolen! 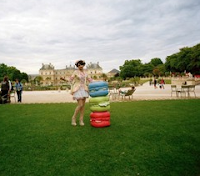 And in other news, Anya Firestone (BA 2010) was recently profiled in an issue of the online Paris guide Bonjour Paris, where she was touted as an example of an artiste who has immersed herself in all things parisien. Check out the site to read about Anya’s fabulous macaron statues–she is pictured with one here at the Jardin de Luxembourg–which pay artistic tribute to the French cookies.

Future GW writers, take note: The author of the piece found Firestone when she read an award-winning poem of hers published in the GW Review.

Jason Fillardi, who will be teaching a course on screenwriting next semester, provides the GW English blog with this brief biography:“Jason Filardi grew up in Mystic, Connecticut and now resides in Los Angeles, California. But before moving to LA, he spent four of the best years of his life studying English at the George Washington…

Although you wouldn’t know it from the mild manner of those of us who inhabit Rome 760, the English Department has been quite busy lately. This is not Prof. Tongson at GW last week, although the set up was remarkably similar and the photo is in the commons! Last week, in addition to seeing the…

English will celebrate Chris Sten’s recent collection on September 13 A lot is going on in the English Department this month. In addition to the just-announced Evening with Toni Morrison, we are thrilled to be celebrating the publication of Prof. Chris Sten’s book Literary Capital: A Washington Reader on Tuesday, September 13 from 4-5:30 p.m….

GW’s inaugural British Council Writer in Residence Nadeem Aslam’s newest novel, The Wasted Vigil has just been released. Mr. Aslam read from the novel at the numerous events that the English department hosted to celebrate his residency, and I, like many of those I talked to, was greatly impressed by his reading of the first…