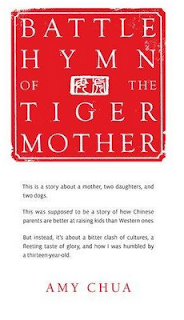 If you were sentient last week, you might have noticed the major media storm generated by the release of Yale Law Professor Amy Chua’s book Hymn of the Tiger Mother. It has been excerpted, dissected, talked about, blogged about, and contested, and has pushed Asian American families (or at least one construct of them) into the national consciousness in a new way.

The next three GWEnglish blog posts are by Prof. Patricia Chu, a specialist in Asian American literature. I asked Patty to write about Amy Chua and so-called ‘Tiger Moms’ for the blog because her training gives her a particularly rich window into the cultural and historical context of Chua’s button-pushing book.
-Gayle Wald

One:  Second Generation Stories
by Patricia Chu
Asian American literature is a terrific archive of the writers’ experiences (in the case of oral history, memoir, autoethnography, and other forms of life writing) and their perceptions (in the case of fictional genres).  Whereas fictional writing doesn’t claim a biographical truth, it’s meant to show the writer’s insights into the interior life of Asian American characters.  Writing fiction permits writers to tell stories that are strong and bitter, without compromising confidences, so often fiction can be franker about suffering and scandal than life writing.  For instance, Shirley Geok-lin Lim, the scholar and poet,  once admitted to me that she compromised  incisiveness for privacy in writing her memoir, Among the White Moon Faces.  “If I had written about my marriage,” she reflected, “ I’m sure it would have been a better book, but I wouldn’t be married today.”
Because Asian American literature is primarily written by American-born writers in English, it is most representative of what I call the second-generation perspective.  The immigrant perspective (which I call first-generation) is represented from different angles, however:  immigrants themselves write about their lives; second-generation sons and daughters write about them; and third-generation Americans write about their grandparents and parents.
Much of Asian American literature consists of second-generation portraits of their struggles to assimilate in the U.S. by reconciling their parents’ demands with the realities of the situation they are born into.  Hence, the difficulties of assimilating in an environment that purports to be democratic and inclusive, but which excludes Asians politically, legally, and culturally on many levels—these difficulties are often represented fictionally as conflicts between the first and second generation.  To put it another way, the mothers (more than the fathers) are charged with maintaining the traditional ways in the new country and with supporting the fathers and children in their work and school—often while they themselves must work a full day to gain wages.  When things are difficult, the narrators (or their readers) often blame the mothers.  But if the children succeed and assimilate, the children may question or abandon the traditional ethos Chua describes, in which “the children owe everything to the parents,” because, by and large, that’s not how Americans think.  Americans view the children’s obligation to their parents through the prism of individualism and independence.  What’s an Asian mother to do?
In Asian American fiction, offspring usually admit that  they owe their success to their parents’ support.  However, in the classic texts I discussed in my book, Assimilating Asians—texts by Amy Tan, Maxine Hong Kingston, Milton Murayama, and John Okada—the mothers are blind to the need to adapt their expectations to their families’ American conditions.  In The Woman Warrior, Maxine Hong Kingston writes about her inability to talk about sex, her fears of their slum neighbors, or her fears that as a highly intelligent,  imaginative Chinese American girl she was not understood and  valued by her parents.  In All I Asking For Is My Body, Milton Muryama depicts a family in which the parents’ obsession with paying off literal debts incurred by their parents blinds them to the need to question the exploitative labor conditions of the plantation for which they work.
In the “comic” texts—the ones with happy endings—there is reconciliation at the end, as children gain sufficient distance and autonomy to appreciate their parents’ sacrifices.  Maxine Hong Kingston writes that fundamentally, she knows her parents love her, but she had to leave home to understand them better.   In a tragic text, such as Faye Myenne Ng’s novel  Bone, the unbearable weight of parental expectations and their disappointments—due in part to their marginal status as illegal immigrants– drives the middle daughter to suicide.  In his memoir Catfish and Mandala, Andrew Pham observes that his refugee mother has become more isolated, rather than happier, as her sons have grown up and become financially independent.
And in her novel  Desirable Daughters, Bharati Mukherjee presents a family modelled externally on her own:  the narrator is one of three daughters who were very successful in school in India, who married well, and who settled in America.  One of them was even offered a featured role in a Satyajit Ray film, though of course she had to turn it down rather than stigmatize her high-caste parents by becoming a film goddess.  Just when the reader is about to throw up—her hands, of course– in the face of the narrator’s self-absorbed bragging, Mukherjee disrobes the skeletons in the closet.  Actually, all the daughters in the family are a bit depressed with the reality of their American lives, in which housewives are isolated and undervalued.    The three grown daughters, separated by oceans from their parents, don’t really see their parents or each other all that much.  And the perfect older sister?  She had to be sent away to give birth to an illegitimate child who was disavowed and raised in an orphanage.  Too bad her parents didn’t give her a choice about the film role; maybe she would still be in India, and on good terms with them, if they had.  Instead of a celebration of traditional Extreme Parenting (to use my friend Norman Bock’s phrase) and Asian perfectionism, the book is a critique of it.  In many books, it seems  that Asian Extreme Parenting is supremely successful, because the children work hard in order to get out of their parents’ house as soon as possible.
NEXT POST: Part Two: Generational Confusion–Tiger Sisterhood

… its recent benevolent, awesome, outstanding, pure of heart, righteous, sophisticated, godlike donors. Among those who have contributed to our department’s mission recently are: Courtney Wang (2007) Olga Tsyganova (2007) Jenny Anne Burkholder (1993) I find it especially heartening when our recent alumni donate — especially because I suspect they are still paying off their…

From today’s Hatchet, a piece on Prof. Robert McRuer’s innovative new class by Gabriella Schwarz: Most field trips for GW classes require a Metro farecard, but passports were necessary for 13 students in an English course this fall. The class, “Transnational Film Studies and LGBTQ Cultures,” taught by professor Robert McRuer, went to the Czech…

You know that graduate school is getting to you when teaching a summer course is considered a “break.” While working on her dissertation on the dictator novel in Latin American and Franco- and Anglophone African literatures, GW alumna and current NYU graduate student Magali Armillas-Tiseyra, decided it would be good to slow down this summer…