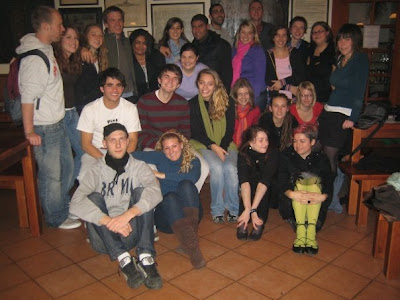 English 179.60 took the department’s global focus quite literally this month. Professor Robert McRuer and thirteen students—including English majors Reed Cooley, Erica Manoatl, Colby Katz-Lapides, Jon Mahoney, and Jessica Rawlins—traveled to Prague on November 5 to spend a week at Mezipatra: the 9th Annual International Lesbian and Gay Film Festival. The class, “Transnational Film Studies and LGBTQ Cultures,” has been meeting weekly this semester at GW for screenings and discussion. The course is intended to introduce students to queer film studies, expand their vocabularies for approaching filmic representations—and cultural representations more broadly—in transnational contexts, and develop awareness of the social construction of sexual identity and community in specific locations. By the time they left for Prague, students had seen multiple films and read widely in queer and transnational theory (with some of the readings and screenings focusing specifically on gender, sexuality, and political economy in eastern Europe). Meanwhile, over in Prague, Professor Katerina Kolarova of the Gender Studies department at Charles University has been teaching a similar course with eleven students. During the week of the festival, the two classes combined and Czech and U.S. students attended seven films together and met daily to discuss them. The discussion of each film was led by a team of students drawn from each of the two classes. Students saw films in German, French, English, and Hebrew. Indeed, the politics of translation was a major discussion point, especially when confusion over the availability of English and Czech subtitles meant that students watched one 75-minute film—Rosa von Praunheim’s Nicht der Homosexuelle ist pervers, sondern die Situation, in der er lebt—in German (class discussion the next day included a more pronounced emphasis on the visual aspects of the film and a critique of the expectations and entitlements that English speakers tend to carry with them). Other films addressed issues of sexuality and aging, HIV/AIDS, sex work, embodiment, transgender identity, family relations, and the urban/rural divide. Czech faculty and students were very gracious hosts, providing focused tours of the city and sharing numerous meals with the GW group. The film festival closed with a dance attended by all the students and the professors (and the students were more than a little amused to see Professors McRuer and Kolarova dancing together). The course was made possible through arrangement with the Office for Study Abroad, which sponsors several “short-term study abroad” courses every year. English 179.60 was one of the first courses in the humanities the office has sponsored.

Dear English Majors and Alumni, The faculty of the English Department care about you — not just as intellectuals and artists (you wow us every day in those roles), but as young people navigating a difficult present. Please know that our office doors are always open to you. If you can, please try to join…

Professor McAleavey’s Spring 2016 course: POETRY EXPLODES IN AMERICA (American Poetry II) ENGL 3621 This course examines important books by eleven American poets from throughout the 20th century, who collectively disrupt the continuity and traditions of English-language poetry, starting with the Georgian, even Horatian lyrics of Robert Frost (just before WW I) through the Modernist…