When the feature film Crazy Rich Asians (dir. Jon Chu, Warner Bros, 2018), a romantic comedy set in Singapore, was released, it was said to have made history for Asian-American representation in the United States. On January 23, English faculty Patty Chu (deputy chair) and Alexa Alice Joubin were featured in a talk-back after a screening of the film at GW’s Elliott School for International Affairs. The screening and discussion was the first of a series of faculty-student engagement events. 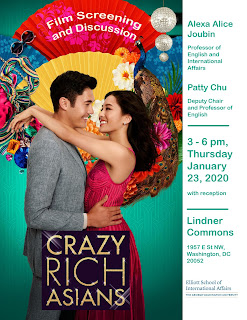 Prof. Chu and Joubin discussed the cultural politics, racial and gender identities, and film and literary techniques behind Kevin Kwan’s novel and Chu’s adaptation of the novel. Featuring an extensive East Asian cast, Crazy Rich Asians has been praised for ethnic representation. However, it is criticized in Asia for casting non-Chinese actors in ethnically Chinese roles and for featuring mostly American and British English rather than Singaporean English accents. 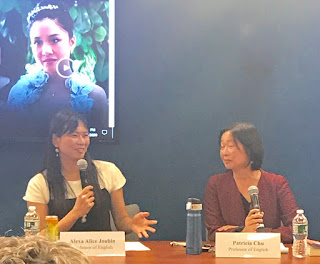 The talk-back session revealed that Crazy Rich Asians is not the first Western-produced feature film with an extensive Asian cast. Predecessors include The Joy Luck Club (1993), Wedding Banquet (1993), Crouching Tiger, Hidden Dragon (2016), Memoirs of a Geisha (2005), and Mulan (1998).

Comparing Crazy Rich Asians to other films, Prof. Joubin said that while The Joy Luck Club suggests that Chinese-American women escape the oppressive society through family bonds, Crazy Rich Asians opines that strong family bonds are obstacles to female empowerment, at least for a new cosmopolitan Chinese diaspora that values individualism. The film sets up Old Asian in opposition to “New Asia” (which happens to be the slogan Singaporean government uses).

Narrative scarcity is a concept Prof. Chu quoted to discuss the dilemma in ethnic studies. There are so few examples of ethnic films and novels that supporters are compelled to celebrate each and every one of them even if some are not as aesthetically interesting.

Faculty, staff and students who participated in the event raised thoughtful questions and shared their views on the film.

Here is some news from our British and Postcolonial Studies Cluster, where some faculty have been publishing new research and forging exciting institutional connections in the US, UK, India and Ireland. Jenny Green-Lewis is glad to say that her essay on Victorian photography and the novel, written for the new Oxford Handbook of the Victorian…

Dover Beach The sea is calm tonight. The tide is full, the moon lies fair Upon the straits; on the French coast the light Gleams and is gone; the cliffs of England stand, Glimmering and vast, out in the tranquil bay. Come to the window, sweet is the night-air! Only, from the long line of…

Professor Jeffrey Cohen‘s new book Earth is featured as a GW Hatchet summer reading suggestion. Read all about it here, and find the book here or here. Share on FacebookTweet

Professor Marshall Alcorn English Department Chair On behalf of the GW English Department, I would like to welcome you to our 2017-2018 Academic year.  Please explore our blog to learn more about us and what we are doing.  Visit us in our offices when you have time.  We want to help you develop as writers…