In the 1940s, when big bands were hiring pretty girls with sweet voices to bob over their beats, Tharpe fronted Lucky Millinder’s raucous swing outfit with gutsy force. In the late 1950s, when blues 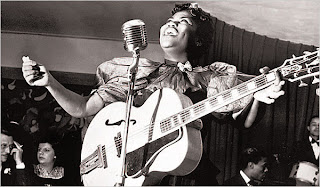 revivalists prized rootsy growls and acoustic guitar twangs, she happily shouted praises over electric riffs. And when early rock historians reached back to trace the form’s lineage, this middle-aged lady cheerily shouting and soloing in front of robed choirs didn’t quite fit their secular, guitar-as-phallus ideal.

Rosetta Tharpe’s story, salvaged here by Wald, a professor of English at George Washington University, is very much a woman’s story, refreshingly free of Svengalis and impresarios. Her picaresque journey from Pentecostal child prodigy in Cotton Plant, Ark., to preteen phenom on Chicago’s church circuit to Cotton Club darling to one of gospel’s first recording stars is constantly surprising.

In Wald’s previous book, “Crossing the Line: Racial Passing in Twentieth-Century U.S. Literature and Culture,” an academic examination of racial construction, she showed a taste for the messiness and necessary creativity at the margins of American cultural life. This interest helps her parse Tharpe’s musical contradictions and sensitively explore touchy issues like the hymnswinger’s rumored bisexuality, which some in her circle deny. The author finds humor and pathos in the tale of Tharpe’s third marriage — a publicity stunt worthy of reality TV, staged on the field of Griffith Stadium in Washington and followed by a concert performed by Tharpe in her wedding dress.

WELCOME TO NATIONAL POETRY MONTH AT GWU ENGLISH! The first National Poetry Month was in April 1996 and was started by The Academy of American Poets as a month-long celebration of poems.  In April 1996, I was an undergraduate at the University of Chicago when my poetry professor, Elizabeth Alexander, tasked her students with creating…

English alumni: GW Magazine wants to hear about the day that you became parents. Since the magazine’s spring issue will be out over Mother’s Day and Father’s Day, the staff thought it would be compelling to open “emotional time capsules” from the day that daughters and sons became mothers and fathers for the first time….