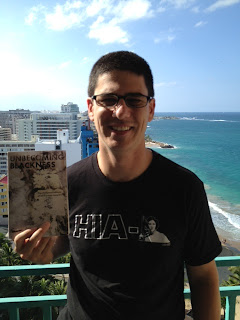 Associate Professor Antonio López’s first book, Unbecoming Blackness: The Diaspora Cultures of Afro-Cuban America, has just been released by New York University Press.  Professor Ricardo Ortiz of Georgetown University, author of Cultural Erotics in Cuban America, says of the book, “Unbecoming Blackness promises to make a transformative impact on Cuban American Literary Studies; it will certainly put López on the map as one of the field’s most important and groundbreaking scholars.”  We had the pleasure of sitting down with Professor López in San Juan, Puerto Rico, this past weekend, where he was presenting at the American Studies Association Convention.  Here’s what he had to say:
What is the main project of Unbecoming Blackness?  How does it specifically intervene in Cuban and Cuban American Studies?  What other fields of literary and cultural studies do you hope the book speaks to?
The point of my book is that there is a tradition of literature and performance by Afro-Cubans in the United States from the 1920s to the present that reveals Cuban America as a place of overlapping Cuban and African diasporic experiences.  It contributes to Cuban Studies by identifying such a tradition as particularly Afro-Cuban-American—that is, as one produced by Afro-Cubans beyond the island, on U.S. ground, in contact with U.S. histories of race and ethnicity in ways that sometimes travel back to Cuba to transform Cuban notions of identity.  At the same time, the book challenges Cuban American Studies by featuring a group of Afro-Cuban-American works that disturb the cultural and political business-as-usual of Cuban American whiteness.  The book is in solidarity with multiple fields in literary and cultural studies, including the field of Latino Studies, of course, as well work in African American and African diaspora, all of which, needless to say, constitutes a large part of what goes by the name of Americanist today.  The book also has a lot to say about colonial and postcolonial conditions, while the way it engages historical archives collaborates in interdisciplinary ways, I hope, with the work of scholars in Latino history.
The subjects of your book seem to be very connected to a lot of your teaching at GW over the past 7 years.  How has your work as a scholar shaped a few of the classes you have designed and implemented? 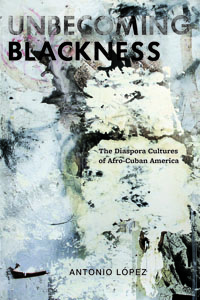 I’ve taught several versions of a Dean’s Seminar on Cuba and its diasporas that have been absolutely connected to the book.  In one class, for example, I brought in recordings of Eusebia Cosme, the poetry reciter and subject of chapter 2, and asked students to listen and respond to the sonic performance of her voice, beyond the meaning of its words, as her non Spanish-speaking African American listeners did at Washington, DC’s Armstrong High School in the late 1930s.  I also taught a graduate seminar called Black Cultural Studies of the Americas that came out of the material that eventually became the book’s introduction.  GW students were wonderfully open to reading and discussing much of the material that went into the book, and they very much shaped my own interpretations.
What was it like having your book “premier” at the American Studies Association Convention in San Juan, Puerto Rico?  Do some of the issues you talk about in your book also haunt that very different colonial space?
It was a thrill to see my book finally on display at the NYU Press tables at the ASA in San Juan!  In fact, there’s an entire chapter of the book—chapter 3, “Supplementary Careers, Boricua Identifications”—that addresses the long, rich history of Cuban and Puerto Rican cultural and political contacts through the situation of Afro-Cuban-Americans and mainland Afro-Puerto-Ricans…so, yes, it was significant to catch a first glimpse of my book in public there.
You’re already hard at work on your next project!  Could you give us a hint at what it’s about?
Most definitely.  The next book project is called “¡Vámonos! Latino Transit Cultures.”  It considers the literary and popular expressions of walking and riding in their embodied varieties across public and private U.S. transportation infrastructures.  It focuses on a range of 20th and 21st-century U.S. Latino works and puts them in conversation with theories of movement, space, and the body from Walter Benjamin to disability and diaspora studies.  I discuss, for example, a text like the Guatemalan-American Héctor Tobar’s novel The Barbarian Nurseries, which sparks reflections on how the presumed “illegality” of Latinas/os in a post-Arizona SB 1070 United States is both managed and undermined by the movements of people across the transit spaces of downtown Los Angeles and its suburbs.  Still another element of the project is a critical ethnography of bus routes in the Latino zones of Prince George’s County, Maryland.  In this way, “¡Vámonos! looks to explore recent debates regarding the built environment, citizenship, and the state.
¡Felicidades Profesor López!

In connection with the presence of novelist Edward P. Jones on campus this semester, English Department graduate students Constance Woodard and Elizabeth Pitman and Gelman librarian Jennifer Kinniff have mounted a new exhibit in Gelman Library. The exhibit is titled A Kind of Map of Life: The Fiction of Edward P. Jones and it explores…

Through its alliance with the Folger Shakespeare Library, the best archive of Shakespeare and Renaissance materials in the US, and one of the best in the world, GW is uniquely positioned to train researchers in early modern and medieval studies. Even Ivy League schools do not have these resources. Here is what we have already:…