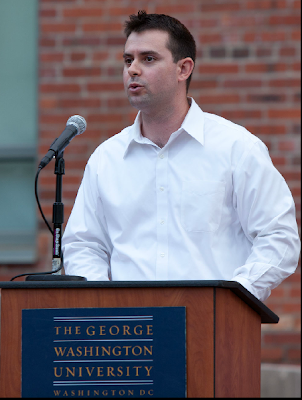 On the occasion of the tenth anniversary of the attacks on 9/11, GW English student blogger and military veteran Joe Mancinik delivered some remarks for a ceremony on the Foggy Bottom campus of the George Washington University. This piece is about his experience.

Before I knew it I had volunteered. Again. The first time I had volunteered for something I was working on a roof in the Florida Panhandle. The combination of humidity, hot tar, and noxious fumes–and the prospect of enduring conditions like that for the rest of my life– drove me into that recruiters’ office faster than my sense of patriotic duty ever would. And, I reflected, after sealing my fate (the second time), it was this choice, made in the godawful Southern heat–the kind of heat that makes your clothes stick to your body so that you itch all over when you dry off– that had given me this opportunity, and this made me feel guilt–raw, introspective stuff–because I knew that I did not deserve it.

I had spent my military service on a ship, I reflected; or in the States. Any time the hint of an “opportunity” to go to Iraq or Afghanistan presented itself I ran the other direction. The truth is, I was terrified. Maybe I wouldn’t be killed, but I might lose a leg or an arm, or part of an arm, I reasoned. And I also felt a deep sense that, in this case, the authorities were deeply mistaken. And, after all, if you can’t trust your command apparatus, what good is an oath to it? That’s how I justified it. And that kind of rational thinking is, if not discouraged, in the military, at least it carries with it a corresponding measure of guilt–just for thinking about it.

Ironically it was in the military that I first lost all faith in the concept of authority. One of my favorite sources of wisdom, H.L. Mencken, once said of my dilemma: “The older I grow, the more I distrust the familiar doctrine that age brings wisdom.”

This was the first break I had with many of my younger college peers, who may still have some hope that their parents and role models have some better notion for the trajectory of their lives. My father wanted me to sell insurance, like he had, and later, to remain in the Navy, where I could look forward to working long hours for supercilious superiors with the distinction of rank to justify their arrogance–forever remaining a nomad while moving from place to place.

My colleagues in the military looked askance at me (the ones who cared) when I announced my decision to separate and go to college. Perhaps some of them may have been envious, feeling trapped themselves. I was taking a big risk. In the military I was assured a regular paycheck and health benefits. I would be taking a massive pay cut (not so massive really) to do something as abstract as learn and gain knowledge. I didn’t hold out much hope for a better job because I was too inured to disappointment by then.

So, here I am, agreeing to speak about my military service, which I regretted to a certain extent, and on a day like September 11, with the knowledge that so many poor kids from small towns, like myself, had gone to Iraq and Afghanistan in defense of ideals too abstract to stand the test of experience, to be maimed or killed, or to maim or kill, in defense of these abstractions; and here I was going to give a speech, in which I would have to speak glowingly of these abstractions.

This made me realize that if I didn’t give the speech, honestly, no one else would be capable of giving it as honestly as I. Now I knew my purpose: to give an honest speech, to expose the lie of patriotism and honor, and to educate these students still suffering from the delusion of compunction and rightness in authority. So I went to work, furiously pounding the keys, whipsawing the pen over the notepad. Exposed would be the fallacies of 9/11: the surveillance, the bag searches, shoe removal, foreign military expeditions; all of it would be brought into the light by my speech. Gritting my teeth I channeled all of my frustration at having to throw out expensive lighters, shaving cream, and hair gel. Rolling up my sleeves I exacted retribution on all of the arrogant officers telling me to shave or come to work on time. The more truth I produced the less guilty I felt about being a coward and avoiding the combat zone. My zeal rode the crest of a divine mandate to expose all of the heresies and madness resulting from 9/11.

Something told me that I should show a draft of my speech to a friend, with the noble intention of sharing these insights and illuminating them. My friend complimented me on my passion, but, well, did I need to dwell so much on the terrorism-security complex or the evil defense contractors in this passage here? This was not exactly the response I was expecting; after all, what the hell did he know? He wasn’t in the military, like me. I did admit that, maybe I didn’t, no. So I went off to show it to another friend and he said nearly the same thing. But what did both of them know? They weren’t writers, like me. Quite deflated, however, I began to doubt my resolve to be a crusader for truth.

Soon after I was sitting somewhere and I wrote something about my guilt at never really sacrificing anything in the military (at least nothing besides a few girlfriends and a lot of sleep). The words started flowing. It was then that I realized that the only way to tell some measure of truth was by talking about my own experience. On a day when so many speeches would be dealing with the same conceits, this was my experience, solely mine. I was the one with the regrets and memories of funny jokes the other guys used to tell during long nights on watch, that the faces in my mind were their faces. The faces of people (we were just kids) who had lived with me through a formative time in their lives with the same regrets, who made the same mistakes, and had spent months and years away from their girlfriends, wives, husbands, children, and families, like me. My purpose now, I finally understood, was to write a speech for them.

As the day of the speech bore down on me (it’s not hard to anticipate the date 9/11 approaching on the calendar), I began feeling that gnawing sense of guilt in my gut again. I was unworthy! This was the tenth anniversary of September 11. Jesus, what if someone in the audience had a friend, or, god forbid, a parent or sibling killed in the attacks? Would they slap me in the face afterwards and call me a hypocrite? Would someone who served in Iraq spit in my face?

The day finally arrived, which was also the “Freshman Day of Service” for the university. I boarded a bus filled with freshmen headed to the Armed Forces Retirement Home in Silver Spring. Someone called me “sir.” I realized that these kids were eight-year-olds in 2001. They sang songs and laughed and flirted with each other. Their simple love of life and levity on such a somber occasion was one of those ironies that still make life beautiful and worth living to me. Those misguided young men who had crashed airliners into buildings could never take away such beauty.

The evening was warm and pleasant as I surveyed the throng of people gathered on the University Yard for the vigil. Suddenly the sight of the freshman processing down 21st street holding lighted candles caught the crowd’s attention–a reminder of the solemnity of the occasion. The president of the university, Steven Knapp, introduced me and called me to the podium. The speech seemed to take forever but came off pretty well. The other speakers complimented me when we had all come down from the rostrum. What moved me most, however, was the unforeseen occurrence of many in the crowd coming up to shake my hand afterwards. One of them told me he also had come to college later than usual (I am thirty-one). The experience was surreal, one of those moments that give color to a memory.

The next morning I opened the student newspaper expecting to find a full transcript of the speech, my picture on the front page, and two editorials: one of which praising my words, and the other vilifying them. Of course, no such thing occurred. There was, however, an elegant one-line summation of the speech (naturally misquoted). My girlfriend reminded me that the speech wasn’t about me, but about the event. Wisdom that I grudgingly had to accept. (She is very much wiser than myself). There were no ovations when I walked into my classes on Monday, either.

So I’m forced to make sense of the experience on my own (which is almost always the case in life, of course). I was honored to be given the opportunity to speak but still wonder whether I’ll ever forgive myself. Maybe I’ll just be one of those old men that wears a Navy hat around the neighborhood, too busy taking care of grandchildren to give it much thought.

Yossarian, the protagonist in “Catch-22,” ascribes his prowess as a bombardier to his inordinate cowardice. Tim O’Brien writes in “The Things They Carried” that his unwillingness to go to Canada to avoid deployment to Vietnam was an act of cowardice. He was too afraid in the end, he wrote, to risk the opprobrium of his community.

I suppose I can take some small measure of comfort from these two great authors’ words, but I don’t really. I just hope that if the time comes when I have sons that I guard against speaking too glowingly or nostalgically about my military career. Of course I am assaulted constantly by such nostalgia, which whispers to me that somewhere there is a ship waiting for me, riding high in its moorings, banners waving in the salt air, to whisk me away, to another time, to other sentiments, back to my youth and innocence.