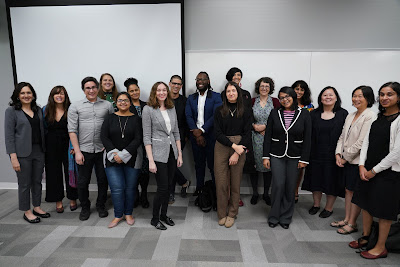 In case you missed it: GW’s first new dialogue on Postcolonial and Ethnic American Literatures!

On Oct 5, 2018, we hosted GW’s first all-day forum on Postcolonial and Ethnic American Literatures! Faculty members Kavita Daiya, Patty Chu, Jennifer James, Antonio Lopez, and Daniel DeWispelare co-organized the Wang Fund Forum on “Crisis and Conflict in Postcolonial and Ethnic American Literatures.” The dialogue was co-sponsored by the Women’s, Gender, and Sexuality Studies Program. This one-day forum aimed to create new conversations about how postcolonial and minority literatures address crisis and conflict in the 20th and 21st centuries, exploring how issues like social justice, human rights, refugees, dictatorships, technology, and the environment are being worked through a range of contemporary writing and cultural production. It addressed diverse geographical and cultural spaces across the world, from Asia to Africa and North America, with race, ethnicity, religion, and gender being key interpretative lenses.

We are delighted to report it was a big success: we had 63 attendees, which included undergraduate and graduate students and faculty from departments and programs across GW, as well as from area schools like University of Maryland, Georgetown, and Howard University. Graduate colleagues Elizabeth Moser, Daniel Atherton, Turni Chakrabarti, and Emma Cassabaum collaborated with the faculty, along with Connie Kibler and Linda Terry, to ensure all went smoothly and well. Among our speakers were recent Ph.D. alumnae from English: Sreyoshi Sarkar and Maia Gil’Adi.
In case you missed it, here is a glimpse of the proceedings, which included exciting and cutting-edge presentations by a notable mix of senior as well as junior scholars working on different geographical and cultural archives from around the world. The feedback we received was heartening: many attendees expressed the hope that we will continue to organize such conversations on an annual basis.
The morning panel revolved around “The Refugee, Transnational Solidarity, and America,” and was co-chaired by Patricia Chu and Kavita Daiya.
Rajini Srikanth (University of Massachusetts Boston) discussed how literary texts about the United States, Biafra, and the Middle East, envision political solidarity across the divides of race, class, and nationality.
Christine So (Georgetown University) spoke about the representation of fear and sympathy in Vietnamese refugee law and literature.
Sangeeta Ray (University of Maryland) gave a talk on the Anthropocene, literary form, and ecological violence in Amitav Ghosh’s The Great Derangement.”
Ayelet Ben-Yishai (University of Haifa) discussed the representation of the 1975 Indian Emergency in popular imagery and literary fiction.
Sreyoshi Sarkar (Ball State University), our alumna, discussed feminism and communalism in the work of contemporary performance artist-poet Sabika Abbas Naqvi in India.
After a robust Q and A discussion and lunch, we began the afternoon panel, “Genre, Aesthetics, and Resistance,” co-chaired by Jennifer James and Antonio Lopez.
Crystal Parikh (New York University) discussed the representation of innocence and the refugee child in American media and literature.
Jennifer Harford Vargas (Bryn Mawr College) examined questions about literary form and authoritarian power in the Latina/o dictatorship novel.
Julius Fleming (University of Maryland) analyzed the affective life of freedom in the context of racial oppression in the work of Nina Simone and Lorraine Hansberry.
Maia Gil’Adi (University of Massachusetts Lowell), our alumna, discussed the representation of crisis and sexual assault in the Latinx canon, with a focus on Junot Diaz.
Sheshalatha Reddy (Howard University) gave a talk about the representation of reproduction, female IRA agents, state violence, and the crisis of value in Irish culture.
We concluded with a lively, rich, and wide-ranging discussion after, about the work of literature in the time of political crisis, and in a comparative, transnational mode. The conversations continued over dinner with faculty, graduate students, and speakers at DC’s Chalin Restaurant.We thank those who came and participated and supported this event; please write to us and send us your feedback (to: kdaiya@gwu.edu). We are also grateful for the invaluable support of the CCAS Media team, and especially April Rongero who designed the poster, as well as the Multicultural Student Services Center for helping us with publicity. Thanks also to Elizabeth Moser and Jay Mallin, for photographing the event. We look forward to growing the conversation on world and ethnic American literatures here at GW.
Toward this, do join us this week on Thurs Oct 18, 4.30 pm, at a talk on queer Asian America, by noted scholar David Eng (University of Pennsylvania). Click here for the details.

When the feature film Crazy Rich Asians (dir. Jon Chu, Warner Bros, 2018), a romantic comedy set in Singapore, was released, it was said to have made history for Asian-American representation in the United States. On January 23, English faculty Patty Chu (deputy chair) and Alexa Alice Joubin were featured in a talk-back after a screening…

The English Department’s annual Jack-O-Lit gathering had a great turn out this year! Many students joined the English faculty in sharing cookies and cider, as well as carving pumpkins into some very creative designs. Maggie Benda and Oona Intemann won Professor Daniel DeWispelare’s new book, Multilingual Subjects, On Standard English, Its Speakers, and Others in the Long…