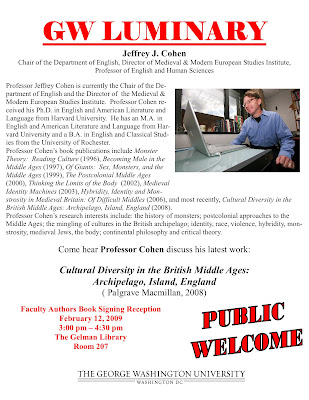 Horn tooting of the worst kind. Click on image to enlarge.

Jeffrey J. Cohen
Chair of the Department of English, Director of GW Medieval & Early Modern Studies Institute,
Professor of English and Human Sciences
Professor Cohen received his Ph.D. in English and American Literature and Language from Harvard University. He has an M.A. in English and American Literature and Language from Harvard University and a B.A. in English and Classical Studies from the University of Rochester. Professor Cohen’s book publications include Monster Theory: Reading Culture (1996), Becoming Male in the Middle Ages (1997), Of Giants: Sex, Monsters, and the Middle Ages (1999), The Postcolonial Middle Ages (2000), Thinking the Limits of the Body (2002), Medieval Identity Machines (2003), Hybridity, Identity and Monstrosity in Medieval Britain: Of Difficult Middles (2006), and most recently, Cultural Diversity in the British Middle Ages: Archipelago, Island, England (2008).

Writer Randall Kenan Join the English Department in welcoming Randall Kenan, the last speaker in this fall’s Jenny McKean Moore readings series. Kenan will read from his work on Thursday, Dec. 8 at 7:30 p.m. in the Marvin Center, Room 310.  Kenan’s fiction includes the novel A VISITATION OF SPIRITS and the short-story collection LET…

Quick pop quiz (answer “yes” or “no” only):1) Are you a genius at saying things in 140 characters or fewer?2) Are you interested in what’s going on in the English department, in English courses, among English professors and students, and in the wider GW English community?3) Do you want to feel even more connected to…