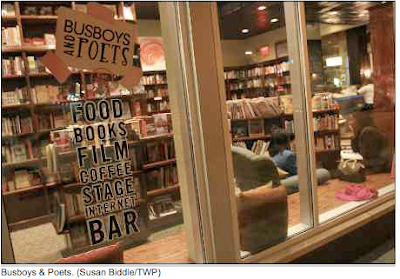 This post is guest blogged by Prof. Gregory Pardlo.

It seems we have not quite put AWP behind us. One of the controversies enlivening the recent writer’s conference has now managed to capture the imagination of people outside the literary community. Picked up by the Associated Press, the debacle over what is now known as “Flat Langston” has gained more widespread attention in two weeks than most books of poetry do during their entire shelf life.

Flat Langston is a life-sized cardboard cutout photograph of Langston Hughes dressed in his busboy uniform from the time when Hughes worked in the Wardman Hotel [now the Marriott Wardman Park, where AWP was headquartered]. He is holding a tray of dirty dishes. This cardboard cutout image was “liberated” from the 14th Street Busboys and Poets by the poet Thomas Sayers Ellis, a DC native who currently teaches at Sarah Lawrence College. The GW community will remember Ellis from his appearance here in the Fall 2010 semester when he gave a reading sponsored by our Creative Writing Program. Ellis also visited my Intermediate Poetry Workshop for an in-depth discussion of the craft of poetry. Not only is Ellis a Harvard and Brown-educated and award-winning poet; not only is he co-founder of the Dark Room Collective, a poetry collective based in Cambridge in the early 1990’s, out of which grew poets such as Pulitzer Prize-winner Natasha Trethewey, Major Jackson, Tracy K. Smith and Kevin Young; not only is he a respected literary activist and an accomplished photographer; but it gives me a perverse thrill to know that we can now add petty larceny to the long list of Ellis’s accomplishments.

As to why TSE stole Flat Langston, here’s the nutshell: There is a faction of the DC literary community that has a longstanding beef with Andy Shallal, owner of BB&P, for what they see as his exploitation of poets and the literary heritage of DC. Indeed, it is more than just a beef over money. The argument, most frankly articulated by poet and Assistant Professor at American University, Kyle Dargan, is that while Shallal is profiting not simply through shrewd marketing and business practices (Shallal is unarguably a shrewd businessperson), the good will he enjoys with his customers is born out of the associations the restaurant has with DC poets and poetry. Further, there is a pretense that BB&P is contributing materially to the development of DC literary talent. However, the $50 weekly stipend BB&P offers their resident poet, Dargan argues, doesn’t cut it.

Into this fray waltzes Flat Langston. Or rather, into DC waltzes the largest annual gathering of American poets and writers, and the spillover delivers TSE to his fateful faceoff with Flat Langston in the dining room of BB&P.

TSE:     Mr. Hughes, what are you doing here? And dressed like that? You only had that job for a little while. If you must be here, you should be honored as a poet, not a busboy.

FL:     Poets have to pay their dues, Thomas. Don’t be so proud. If I weren’t bussing tables, I would be adjunct teaching somewhere for the same amount of money.

TSE:     All due respect, Sir, it’s not a matter of pride. It’s a matter of literary history. Your legacy is not defined by one of your many temporary jobs. Yet this restaurant has turned you into a mascot.

TSE:    Sir, by rights, if you were respected here, you would be a marble bust. Or a portrait with a little brass lamp over you bathing you in eternal glow. Have you seen yourself lately? Not only are you depicted as a busboy, but you’re a cardboard cutout.

TSE:    Sir, sir, we really don’t want to be distracted. Let’s just say it’s complicated. In many ways more complicated now than in your day. But we do have to get you out of here, Sir. C’mon. You comfortable in there? muffled response from FL under TSE’s coat OK, let’s go.

The AP article points out that the bookstore Politics and Prose does not pay its featured readers either. The article does not point out however, that Politics and Prose does not have the benefit of plying its customers with food and drink once the literary environment, if not the readers themselves, draws the customers to the store. This is not to say Shallal has no defense. Shallal’s position is clear in one of his recent statements on matter: “We want to be better stewards. We are the big boy on the block.”

Along with an open letter making patent the intricate motivations for liberating Flat Langston, Dargan delivered a check for the cost of the cutout to Shallal, $150. The open letter was signed by a host of DC poets, myself included. Shallal returned the check and promised not to replace Flat Langston. He also replied to the letter with a conciliatory letter of his own. The subject is still a sensitive one, but the grievances have been aired. And it is clear the two sides of the issue have the best intentions for the DC literary scene. In the words of Ezra Pound, “let there be commerce between us.”

Attendees at this year’s Mezipatra (which means “mezzanine” in Czech).Can you find any of the GWU students? Once again this year, GWU students had the unique opportunity to join Prof. Robert McRuer in attending Mezipatra, the Czech Queer Film Festival The students in the class will be presenting their work at a one-day symposium Saturday,…

Rajiv Menon, a junior here at GW, was one of ten students enrolled in a one-credit reading course with our GW-British Council Writer in Residence, Nadeem Aslam. Students in the class were required to keep a reading journal and compose an essay about the experience. We thank Rajiv for sharing his reflections with the English…

We will have two very special versions of English 182 this coming spring. More information will follow here, but for the time being, here is the application. Applications may be submitted until the course roster has been completed, but we urge students to turn in their applications by Nov. 7 if at all possible. We…

Our intrepid Front Office Student Worker, Sasha, somehow conned the department chair into opening a Twitter account under the name “GWENGL.” A series of tweets erupted yesterday, with more likely to follow. We consider this twitter twaddle to be a two week experiment. Most of what will be disseminated will be lies (we are a…