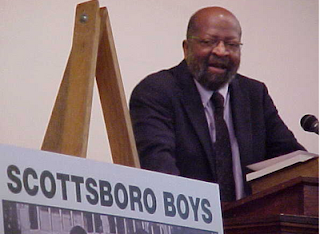 The English department is thrilled to announce that Prof. James Millers’s 2009 book Remembering Scottsboro: The Legacy of an Infamous Trial (Princeton UP, 2009) has been nominated for a Hurston/Wright Legacy Award in the nonfiction category. Jim’s book examines how the compelling and tragic case of the “Scottsboro Boys,” a group of nine black youths charged in 1931 with raping two white women in Scottsboro, Alabama, continues to resonate in American culture. Despite meager and contradictory evidence, all nine were found guilty, and eight were condemned to death. Remembering Scottsboro examines how this case has embedded itself in American consciousness, becoming a lens for the ways we understand race, class, sexual politics, and justice.

According to the Hurston/Wright Foundation, which sponsors the awards, “The Hurston/Wright Legacy Award honors exemplary works of literature before the national community of Black writers. By honoring these nominees, we’re recognizing the profound significance, necessity, and genius of Black writers and the stories they tell.” Awards fall under three categories: Fiction, Nonfiction, and Poetry. The winners of this year’s awards will be announced at a special ceremony on November 15 at Eatonville, a Hurston-inspired restaurant in DC.

Other nominees for this year’s nonfiction award are Robin Kelley, William Julius Wilson, Betty DeRamus, Wil Haygood, and Gwen Ifill, so Jim is in esteemed company.

You can read a sample chapter of Prof. Miller’s fascinating and important work here.

Or, if you happen to find yourself in Medellín, Columbia next week, stop by Cien años de Mark Twain, September 10-12, at the Centro Colombo Americano de Medellín, where Jim will speaking on “Tom Sawyer and Huckleberry Finn.” The conference marks the hundred-year anniversary of Twain’s death in 1910.

NEWS FLASH: GW English is proud to announce that the University is a major sponsor of the 2011 AWP Conference, to be held in Washington from February 2-5. The AWP, or Association of Writers & Writing Programs, is the country’s leading organization of creative writers and creative writing programs, and its annual conference—which takes place…

We are honored to have Sarah Werner of the Folger Shakespeare Library teaching a seminar for us this coming spring. Though the seminar is offered at the graduate level, we are opening five spots in the class to undergraduate English majors who are interested in the subject and who would like to do some advanced…

Menachem Wecker’s account of the inaugural GW English Distinguished Lecture in Literary and Cultural Studies: Gas Chambers and the Metro Lecture series opens with contrast of spaces for “worthy” and “unworthy” citizens by disability studies pioneer and author Rosemarie Garland-Thomson. By Menachem Wecker Although Washingtonians often love to hate the Metro, they do not compare…