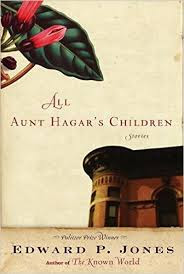 One Book. One City. One Good Read.

That is how DC Reads, a DC Public Library literacy program that promotes reading for pleasure by having citywide celebrations for teens and adults that focus on one book, opens its description of this year’s selection.  Each year a new book is selected by a public nomination process.  This year, GW English is happy to announce, the DC Reads selection is All Aunt Hagar’s Children (2006) by GW English Professor Edward P. Jones.  You can find all the details of DC Reads, which runs from October 15-November 9 here.

If you have not yet had the pleasure of reading All Aunt Hagar’s Children, now is the perfect chance to do so, along with the rest of Washington, D.C.!

“In All Aunt Hagar’s Children, fourteen stories describe what life was like for African Americans migrating to and growing up in Washington, D. C.  Edward P. Jones’s characters and scenes come to life with vivid imagery and great attention to detail.  The city embraces them. Many of these characters not only carry burdens of their past but those of previous generations as well.  The story of the Great Migration from the South is part of their history.  They work tirelessly, dream of better lives, and struggle to combat obstacles that stand in their way. In the end, there is light at the end of the tunnel; the darkness is pierced with glimmers of hope.  Fear not, for Aunt Hagar’s children are a tenacious lot. Their roots are planted firmly in the ground and there they shall remain.  Their faith in the power of family will see them through.  They will survive.”

All Aunt Hagar’s Children was nominated for the PEN/Faulkner award in 2007.  In 2010, Professor Jones won the PEN/Malamud Award for excellence in the art of the short story.

Following on the heels of GW President Steve Knapp and Folger Shakespeare Library director Michael Witmore who advocated for funding for the NEH at a congressional hearing, Alexa Alice Joubin recently testified in front of Congress on behalf of the humanities on May 16, 2013.      The event on Capitol Hill was…

Shakespeare’s plays enjoy a great deal of popularity across the world, yet most of us study Shakespeare’s local productions. Alexa Alice Joubin‘s Shakespeare and East Asia (Oxford 2021) addresses this gap through a wide-ranging analysis of stage and film adaptations related to Japan, South Korea, China, Singapore, Tibet, Hong Kong, Taiwan, the US and UK, including Asian American works….

GW Professorial Lecturer in English Matt Fullerty, who is currently teaching ENGL 62 (Comedy) and ENGL 52W (English Literature), recently found himself in the middle of a national news story in the UK. Last weekend, a human skull was dug up in the garden of broadcaster/naturalist Sir David Attenborough in London. It turns out to…