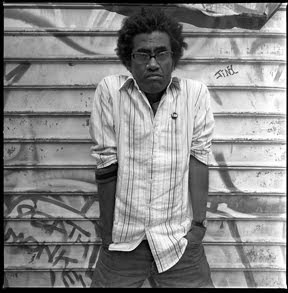 Although Ellis doesn’t directly employ the metaphor of the master’s house in Skin, Inc., we can hear Lorde’s dictum echoing throughout. The metaphor is not merely a vehicle for the historical memory of American slavery. It expands to encompass a kind of architecture of poetry in our calcified literary environment that privileges poems that behave like stately Greek revival mansions in which no one actually lives.
“Thus,” states Ellis, “our work has struggled in containers not of our construction; and yet, within those constraints, we have conjured a magnificent aesthetic toolbox.”

It is with this attention Ellis pays to the containers that are alien to the artist yet simultaneously so familiar they are almost inviolable aspects of American aesthetic antiquity that the poet presents and reflects on his writing. “Containers” as defined by Ellis conceptually expresses much more than a single, simply-identified constricting set of creative commandments.

**Before reading “Godzilla’s Avocado,” T.S.E. gave us a little back story. It turns out the piece was written in response to a random request the poet received from the not-so-random NPR for a “food poem.” After reading the featured poem, Ellis quipped, “Yeah…they told me it was ‘all over the place.'”

**At one point–right before ‘singing’ “The Pronoun-Vowel Reparations Song”–Ellis turned the book toward us (grade-school teacher style) and gestured toward the letters on the page. “Look what they let me get away with,” Ellis exclaimed as the audience observed the poem was written in the style of an eye-chart. “I’m farsighted,” Ellis stated smiling, “so I spent a lot of time at the ophthalmologist.” Although it would be obtuse to assume publishers are the only determiners of the cruel, constricting containers of which Ellis speaks, this population–and the picking & choosing that implied in the industry side of literature–seem to fit a broad definition of container-creators.

**Even the container of classic reading comportment was–with a wave of Ellis’s emphatic hand–dismissed. “Feel free to shout out,” the author added. The reading’s sole preadolescent attendee was also given room to roam. As Ellis spoke, the toddler ran his Hotwheels car around a makeshift racetrack: the molding of the Marvin Center room.

**Arguably, Ellis’s most shocking statement came in the Q&A period in which, after tapping the book jacket of his copy of Skin, Inc. he said “these are dead bodies in a way.” The face of the girl who had posed the question (something about what sort of research and inspiration had gone into the collection) indicated the response was not one she’d anticipated. Ellis argued that even collections of his own work have the potential to “pigeonhole” in the same way preconceived “containers” do. Lifting up the book the poet went on: after they are written, published, “I turn my back on them.They are representations. They represent. That’s it … You can’t hold poetry–We’re not there yet.”

It was an evening of entertainment but also one of inquiry. Ellis is engaged in probing of American cultural interests, the forms taken in artistic expression, and the implications of expression taking these forms as opposed to those. Pardlo’s piece to open resonated throughout the reading, as it was increasingly easy to attest to Pardlo’s depiction of Ellis as “a master carpenter…[who]has taken that Greek-Revival mansion that was abandoned and built additions to accommodate all the cousins and in-laws who might care to move in.”

In the discussion that unfolded at this post about the humanities at GW, Calder Stembel kindly linked to a letter he composed to The Hatchet about arts and politics at this institution. The letter in its entirety is worth your time, but I want to excerpt some parts that speaks to the crux of the…

Today’s Martin Luther King Jr. holiday is an occasion for national service, especially here in DC, where GW undergrads will be giving their time to various organizations and efforts. But the holiday is also an occasion for reflection. Today’s students might not think much about it, but African American literary studies as an academic discipline…

Karen Russell, a young American writer who was recently featured in The New Yorker‘s “20 Under 40” list of young American literary talents, reads tonight from her latest work. The reading, the last of the year in the English Department’s Jenny McKean Moore series, is at 8 in the Marvin Center Amphitheater. All are welcome….

Whether you are a graduate of the department, a current English major, or simply an interested reader, we love to hear reader comments. Drop us a line: chair@gwu.edu We’re always looking for suggestions — and volunteers — for our features. We’re particularly interested in expanding our featured alumni section, and in featuring the work, projects…

Renowned British novelist Howard Jacobson will be our third GW-British Council Writer in Residence during February 2010. Like Suhayl Saadi and Nadeem Aslam before him, Mr. Jacobson will read four works of his choosing with students and discuss them informally over four Tuesday nights. Upon completion of the course students will turn in 5 pages…