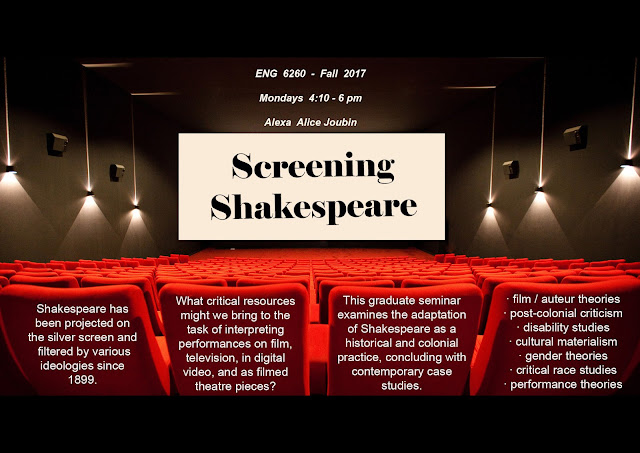 Shakespeare has been screened–projected on the silver screen and filtered by various ideologies—since 1899. What critical resources might we bring to the task of interpreting performances on film, television, in digital video, and as filmed theatre pieces?
This seminar examines the adaptation of Shakespeare as a historical and colonial practice, concluding with contemporary case studies.
Theories covered include postcolonial criticism, disability studies, cultural materialism, gender theories, critical race studies, film and auteur theories, and performance theories.

Professor Holly Dugan reports on Shakespearean London, a short-term study abroad course that GW English will run again in the coming semester! Last March, my students and I travelled to London and Stratford as part of English 3446: Shakespearean London. We had the opportunity to study Shakespeare in some of the locations that defined his…

The last weeks of April are busy ones on campus. Here are three upcoming events of interest. Come out to hear our own Jane Shore on April 19 at 7:30 p.m. in Phillips B156. Prof. Shore will be reading from That Said, New and Selected Poems (Houghton Mifflin Harcourt), in an event sponsored by the…