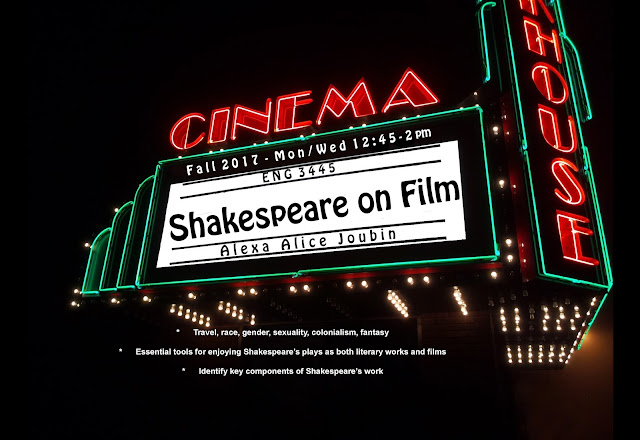 Shakespeare’s plays have been adapted for the cinema since 1899 in multiple film genres, including silent film, film noire, Western, theatrical film, and Hollywood films.

This course examines Shakespeare’s lesser-known romance play, histories, tragedies, and comedies and their adaptations on screen, with a focus on the themes of race, gender, sexuality, and colonialism.

Chuck Frank, GW English BA ’74 GW English Alum Charles “Chuck” Frank (BA, 1974) was recently featured on the GW Impact blog for his important philanthrophic work, particularly his establishment of The Charles and Deborah Frank Fund for Veterans Studying Sustainability.  You can read the entire piece here.  This excerpt provides a summary of Frank’s…

Faulkner and Morrison:  Race, Memory, and Aesthetics ENGL 3820W (CRN 15624) Professor Evelyn Schreiber Tuesday/Thursday 12:45-2:00 PM This exciting Fall 2016 course will comprehensively examine the works of two renowned and integral American authors, William Faulkner and Toni Morrison, linking their fictional and discursive practices and analyzing how their works and ideologies reflect on each…

An exciting opportunity for interested students! This fall, GW English will continue our partnership with the PEN/Faulkner Foundation, specifically its “Writers in Schools” program. Writers in Schools has been running in DC for more than 20 yeas. It pairs writers with English (high school) classrooms, providing support to teachers and students and facilitating visits by writers to schools. Teachers,…